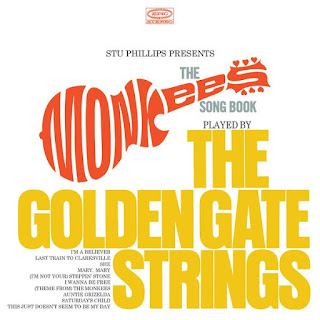 Here's a wee bit of fun, for Monkees fans and cheese enthusiasts as well. String albums were surprisingly big sellers in the '60's, with the Hollyridge Strings the purveyors of hit collections by The Beatles and The Beach Boys ,among others. The guy behind them was a producer/arranger named Stu Phillips, who had a bunch of hits to his credit, million sellers such as Johnny Angel by Shelley Fabares. There was no such orchestra as the Hollyridge Strings of course, just a bunch of session players hired by Capitol Records.


Phillips moved to television, doing background music for first the Donna Reed Show, and then the new hit The Monkees. By year two of the series, 1967, he also had a job with Epic Records, so they decided to bring back the string concept. However, Phillips couldn't use the Hollyridge name, since it was Capitol's, so he used Epic's name, The Golden Gate Strings.


As Phillips was already very familiar with The Monkees' music, he was able to come up with some pretty interesting arrangements. (I'm Not Your) Steppin' Stone, a pretty edgy rocker for the day, became a moody theme. The already goofy Auntie Grizelda could have been in a screwball comedy of the day in this version. The originally frantic (Theme from) The Monkees here has a surprisingly complicated melody, with a little James Bond ending thrown on.


Phillips stayed in the TV and film game, composing instrumental music for everything from Beyond the Valley of the Dolls to Knight Rider to Battlestar Galactica. The Monkees show was cancelled, and they were never heard from again.
Posted by Bob Mersereau at 6:22 PM