MUSIC REVIEW OF THE DAY: DIANA KRALL - TURN UP THE QUIET 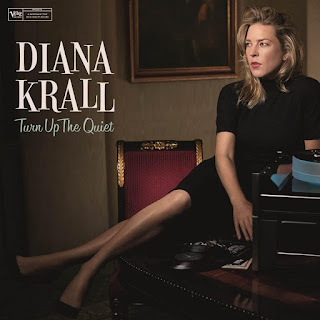 This is Krall's most popular style, her intimate takes on classic vocal numbers, with small combos supporting her piano work. There are a few selections with large string sections, but they are kept as subtle as possible by producer Tommy Lipuma, a gentle accent rather than a lush addition. As always, Krall is able to breathe life and surprising swing into chestnuts such as L-O-V-E (the Nat King Cole number), and Blue Skies.


There are three tasty groups featured on the 11 cuts. The smallest features only Christian McBride on bass and Russell Malone on guitar. The next set has John Clayton Jr. on bass, Anthony Wilson on guitar, and adds drummer Jeff Hamilton. There are lots of smart arrangements that let each player shine, Krall certainly not a spotlight hog on the piano. The most interesting numbers feature a fascinating group long-time Dylan bass player Tony Garnier, drummer Karriem Riggins, the great Marc Ribot on guitar (Tom Waits, Elvis Costello) and most surprisingly, fiddler Stuart Duncan, known for bluegrass and beyond. As top-notch as the other tracks are, I would have loved to hear a whole album with this group, On Moonglow, Duncan winds his way around Krall's vocal, and then takes a solo that sets the song apart from the Songbook era. Then Ribot and Krall come in with their own inspired breaks.


Again, this takes nothing away from the fine versions elsewhere on the album, especially when Moonglow is followed by Blue Skies, where McBride, Malone and especially Krall are on fire, taking the song at a delightful pace. But I can't get enough of the that fiddle band.
Posted by Bob Mersereau at 1:56 AM