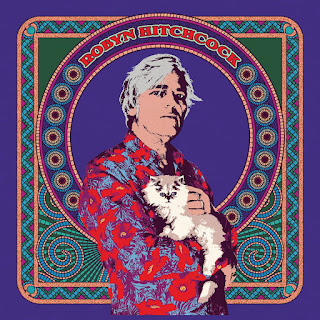 The always delightful Robyn Hitchcock has hit another purple patch in his long run, with 2014's admired The Man Upstairs followed up strongly with this self-titled effort. If anything, Hitchcock sounds invigorated and even younger, with some edgy rockers that hark back to his Soft Boys times.


As always, there's lots of quirky but catchy writing, with references to mechanical overlords, Sylvia Plath and Virginia Woolf, and the wonderfully titled "1970 In Aspic". What the song "Detective Mindhorn" has to do with the new British of the same name I'm not sure, but it's one of his best pop tunes yet. Given the subject matter of these and others, such as "Mad Shelley's Letterbox", it's surprising how concise and attractive he keeps the songs. They are tight, charming and crisp, and if it wasn't so wild a thought, you'd think he was trying to write a hit single for some really, really great radio station. It's Hitchcock at his most accessible ever, and there's absolutely nothing wrong with that plan.
Posted by Bob Mersereau at 9:33 PM