MUSIC REVIEW OF THE DAY: STEVE KOZAK BAND - IT'S TIME 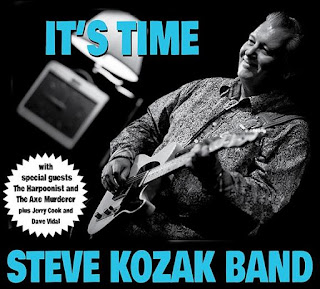 Blues from the Vancouver scene, Kozak and his tight band are augmented by the Harpoonist and the Axe Murderer for his latest, with Matthew "Axe" Rogers handling the production as well. Even being far away from the Toronto-dominated blues scene in the country, he's managed to impress his way in, and this set is only going to add to his acclaim.


Kozak's a fine writer with lots more to talk about then the usual woman done me wrong songs, including the you-can't-go-back blues of "Stranger In My Home Town", and a tribute to the joys of a simple pursuit, "Goin' Fishin'". He's smart with the covers as well, digging deep for the hipster cool of Brook Benton's "Kiddio" and using the Harpoonist to great effect on Magic Sam's "Every Night and Every Day".This highly adaptable group shifts easily from jump blues and r'n'b to electric sizzle, but everything is played with a sense of history and respect for the form. Things are happening out west.
Posted by Bob Mersereau at 10:54 PM