MUSIC REVIEW OF THE DAY: NICK CAVE and the BAD SEEDS - LOVELY CREATURES 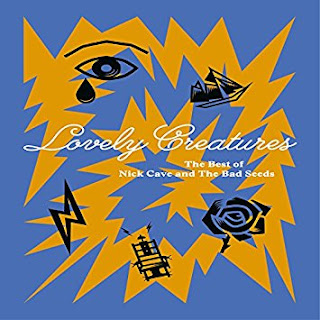 This collection celebrates the output of the Bad Seeds band, as opposed to Nick Cave himself, so you won't find his soundtrack work here, or old Birthday Party cuts. Certainly there's enough to examine in the 30 years covered here. Available in several packages, including CD, digital and vinyl, you also get the choice of one, two or three CD's worth, plus a two-hour DVD of live appearances. The more, the better of course.


Cave and his colleagues exist in extremes. Loud is very loud, quiet is nearly hushed, experiments are wild. Cave's lyrics are disarming and disconcerting and even scary, and his topics elemental: God, death, love, sex, violence, all at their most intense. It's not mere shock value, although there are plenty of shocking moments. This is a band that refuses to blink, and insists on examining the darkest corners. It's not for the faint of heart, but if you are brave enough to follow along, you'll find deep understanding.


Along the journey, Cave learned a few tricks, and the group changed from a raw wound to a softer presence. Cave had realized the quiet made his love songs, such as Into My Arms that much more potent. Later on, they became something terribly out of fashion, an actual rock and roll band, about as powerful as has ever been, steering his new anthems such as There She Goes, My Beautiful World and Dig, Lazarus, Dig!!! At his best, Cave approaches the lyrical strengths of Dylan and Cohen, but with the decadence and darkness of Lou Reed.


The DVD is a fine addition, featuring some brief interview sections that give some insight into Cave's drive, but never too long to get dull. The performances come from all over, including raw YouTube footage, commercial DVD cuts and TV appearances. There's some very strong material from British TV shows, and a live MTV version of the legendary Aussie pairing of Cave and Kylie Minogue on Where The Wild Roses Grow from his Murder Ballads album. Cave's work is going to be examined for a long time, and will probably only grow in stature.
Posted by Bob Mersereau at 2:25 AM