MUSIC REVIEW OF THE DAY: ART BERGMANN - REMEMBER HER NAME 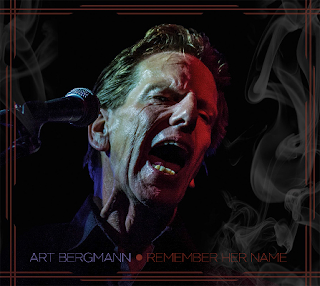 The idea that Art Bergmann would be up performing at the Halifax Urban Folk Festival Thursday and Friday night seemed pretty far-fetched just a few years back. Bergmann was suffering through osteoarthritis, and was gone from the music world for over a decade. But a career-saving back operation and some titanium support beams allow him back on stage now, and last year, he released his first full album in 18 years, The Apostate. That was followed this year by the re-release of his 1991 self-titled album, which is now called Remember Her Name.

Bergmann is a founding father of Canadian punk, starting with his Vancouver band The Young Canadians, and then his solo albums. He's been through it all, and come out exactly the way you'd hope, with a social conscience and empathy for those with a hard life. Along the way, he always proved to be a great rock songwriter with an edge, letting that punk energy fire up some decidedly hooked-filled blasts. That really comes to the fore on Remember Her Name, which features the chipper single Faithlessly Yours. and the title cut, which looks sympathetically at a tough case who seems like she could be Marianne Faithful. Latter-day Marianne Faithful, that is, the rough one. Most reissues, especially 26-year-old ones, sound of their time, but there's nothing here that doesn't sound fresh and exhilarating, and with it's new name and new, current cover art, it might as well be. If you did grab this back in the day, congrats, but you may want a new copy to grab the bonus cut Wide On/Hard Body, left over from the sessions.

Bergmann plays a full show Thursday night at the HUFF at the Seahorse Tavern, backed by the Halifax All-Stars, the ad hoc group of local killers that work with visitors for the shows. Then on Friday night, he'll be part of the songwriter's circle with Moe Berg, John K. Samson and Tift Merritt at the Carleton.
Posted by Bob Mersereau at 9:53 PM