MUSIC REVIEW OF THE DAY: EMMYLOU HARRIS & THE NASH RAMBLERS - AT THE RYMAN 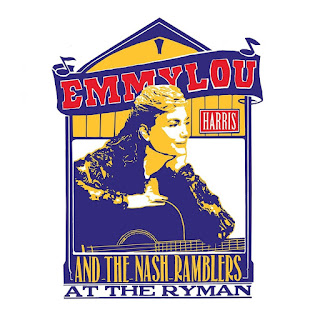 These days, it's hard to find an empty night at the Mother Church of country music, the venerable Ryman Auditorium in Nashville. Shows coming up in the next few weeks include Jason Isbell, Father John Misty, Alison Krauss and even UB40. Loretta Lynn had to cancel hers, recovering from a recent stroke. Through the day, you can take tours, or see an audio-visual presentation about the years when the building housed the original Grand Old Opry.

Shockingly, all that was almost lost to the wrecking ball. Back in 1991 when Emmylou Harris took the stage to record this live album, it was so decrepit the balcony was off-limits, and only 200 people were allowed inside the hall meant to hold over 2,000. But Harris's album, and the documentary done to focus attention on the 100-year old building helped spur renewed interest in its fate, and three years later a complete renovation occurred, making it a must-see spot in Nashville.

Par for the course for Harris, who was actually just looking for a spot to record her brand-new old-time group The Nash Ramblers, but turned it into a crusade. In a new second act in her career, she became the spokesperson for classic country, helping launch the Americana movement. The album featured bluegrass players Roy Huskey Jr., Sam Bush and Al Perkins, but with drummer Larry Atamanuik and second guitar/harmony singer Jon Randall Stewart helping bridge the gap to modern sounds. Harris matched old Bill Monroe and Johnny Cash songs with those from Steve Earle, Springsteen and even CCR's Lodi, showing how it all came together, that's it's all great music.

Harris has been celebrating the 25th anniversary of the Grammy-winning album with a series of projects. In May, she reconvened the Ramblers for a return engagement at the Ryman playing the complete album, soon to be a PBS special seen on every fundraiser. It's been reissued on vinyl, and this CD features two previously unreleased cuts, the song Rollin' and Ramblin' about Hank Williams, and the band instrumental The Nash Ramble.
Posted by Bob Mersereau at 9:02 PM