MUSIC REVIEW OF THE DAY: EAGLES OF DEATH METAL - I LOVE YOU ALL THE TIME 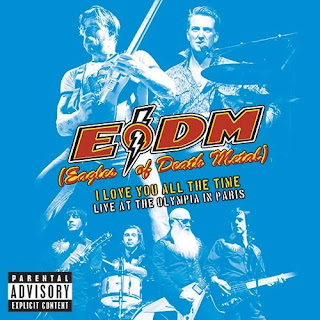 Eagles of Death Metal were, horrifyingly for them, the band playing the Bataclan in Paris on November 13, 2015 when 89 people were slaughtered in a terrorist attack. Vowing to return, the band first appeared as guests at a U2 show a month later, and then headlined their own event at the Paris Olympia on Feb. 16, 2016, resuming their European tour. This is the show of that concert, about 90 minutes over two discs.

Although co-founder Josh Homme doesn't usually tour with the group, he made a special appearance that night behind the drum kit. But as always, on stage this is Jesse Hughes' group, with his oversized personality and enthusiasm. Since the group is largely about celebrating metal riffs mixed with over-the-top pop attitude, there wasn't going to be a big cathartic statement for the city, more like an announcement that nothing would stop the rawk. There was a brief pause right at the start in the middle of the first song, I Only Want You, and then it was Hughes' circus act the rest of the night, except for a shout-out to the group's merch manager, Nick Alexander, one of the Bataclan victims.

The last EODM album, Zipper Down, was surprisingly polished and tuneful, but that hasn't translated to the live show so much. It's still more of a full-on guitar-boogie. and Hughes is happy to keep it slightly sloppy and loud. The memorable melodies here come from a couple of tongue-in-cheek covers, Stuck In The Middle With You, now called Stuck In The Metal, and their beloved take on Duran Duran's Save A Prayer. This won't be the concert of the group's career, but it was a statement that needed to be made.
Posted by Bob Mersereau at 11:30 PM