MUSIC REVIEW OF THE DAY: FAIRPORT CONVENTION - COME ALL YE 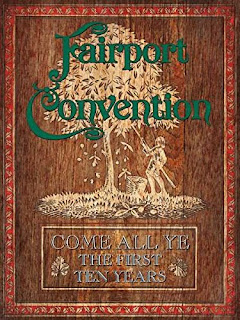 Fairport fans will go wacky with this new seven-disc box featuring a whopping 55 previously unreleased tracks. That includes two full live concerts from '73 and '74, and everything from outtakes to alternates to BBC tracks. And since it only covers the group's first decade, that means the glory days of their two brightest stars, Richard Thompson and Sandy Denny are here.

The box does a great job of being a primer as well, and at a price of just under $100, is a reasonable way to begin the journey. You'll discover they actually started as more of a late '60's rock band with a nod to singer-songwriters, covering Joni Mitchell, Leonard Cohen and Dylan, while Thompson tentatively dipped his toe into writing, while firing off guitar-hero leads. With the addition of Denny and then fiddler Dave Swarbrick they started modernizing traditional material into rock band settings, and invented British folk rock. It differed from its American cousin in that it was a lot more folk, and a lot more rock. But the fragile mix was hard to capture for long. Whenever it strayed too far to one side or the other, defections would follow, starting with Iain "Shake It" Matthews, then Denny, followed by Thompson. The Swarb groups of the early '70's produced some good moments, but it was a relief when Denny returned in 1974, such a great singer.

There's so much room in the box, you can follow brilliant side roads in their career, including a stop at the rock and roll cover band The Bunch that featured Thompson and Denny playing Buddy Holly cuts with their old pals. Or you can see Fairport as one of the truly great Dylan covers bands, with early access to The Basement Tapes demos (Down In The Flood), and their British hit cover of If You Gotta Go, Go Now, done as a Cajun number completely in French (Si Tu Dois Partir).

The downside here is the sacrifice of packaging for price points, meaning only a small booklet and no info on where the cuts first appeared. It's a little too democratic as well, with lesser, later albums afforded the same space as classics. For you newbies, if this catches your fancy, you should just go out and buy copies of Unhalfbricking and Liege and Leaf as well. For you old fans, did I mention there are 55 previously unreleased cuts? You can ever own too many versions of Sloth, can you?
Posted by Bob Mersereau at 3:45 PM