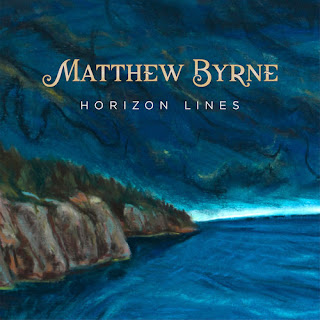 For anyone who might think there's nothing new to offer from traditional music, I direct you immediately to Byrne's song Adelaide, not only completely new and completely true, it happened to his own family, his father, in 1990. A letter appeared in a St. John's newspaper from an old sailor, wondering if anyone knew what had happened to one Adelaide Byrne, whom he had met and fell in love with in 1947. It turned out to be Byrne's father's sister, who had died shortly after. The mystery had been solved for the sailor of why his first love had stopped writing him back.

Byrne has written a heart-tugging song of that story, fully the equal of the other great traditional ballads offered on his third solo album. Family has always been key to his career, on his own and with The Dardenelles, coming from a family of performers and music historians. With a clear voice that heads straight for your soul, Byrne does a masterful job highlighting the emotion in each song. Nancy From London is a Newfoundland song about that most frightening and common reality for many a century or more past, a sailor's wife having to live for months not knowing if her love would return home. He found Long Years Ago on a tape of his grandmother singing that his mother had made years back. His learned the Scottish number Farewell To Tarwathie from his uncle's repertoire. And his father Joe appears again, this time to sing Kitty Bawn O'Brien. Trad's alive and very well in Byrne's hands, and as it's always been, all about family.
Posted by Bob Mersereau at 9:02 PM