MUSIC REVIEW OF THE DAY: PAUL KELLY - LIFE IS FINE 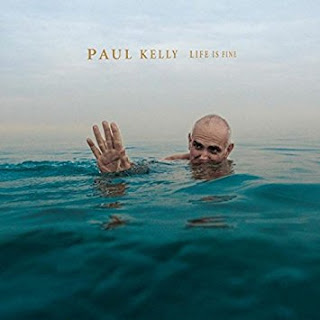 Kelly has long been a leading light songwriter-rocker in Australia, and occasionally his stuff gets though to a small but mighty following in North America. It's fad-less and no-nonsense, with great stories and excellent ensemble playing, roots-rock if that's a category Down Under. I'd call it Antipodean Austinian.

Above all, Kelly builds solid songs based on smart, conversational lines and moving melodies. Even the break-up song Petrichor has words and a tune that inspires: "I walked straight, didn't turn my head, the hardest thing I ever did, seabirds wheeling overhead and cryin'." Everything is to serve the song, and Kelly even generously hands over the vocal duties on My Man's Got A Cold to backing singer Vika Bull, since it makes more sense, and she nails the wailing blues. Her sister Linda gets to do the same for Don't Explain. He's brave too; Kelly takes an old Roy Orbison hit and updates the story in Leah: The Sequel, thus seeing his name join the legend's in the writer's credits. But it's a darn good one, and I doubt the Big O would have a problem with an album of such fine writing.
Posted by Bob Mersereau at 4:06 PM