MUSIC REVIEW OF THE DAY: THE NIGHTHAWKS - ALL YOU GOTTA DO 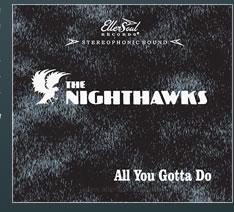 Blues bands are a little like baseball teams, I figure. Once you root for one, you always like them, no matter how much the lineup changes or their fortunes rise and fall. Real good bands, like real good franchises, always seem to be able to put on a good show. I think of The Nighthawks as like the Yankees or Dodgers, always putting a good team together. I'll stop the baseball metaphor, hopefully you get my point.


I remember seeing the D.C. band back in the mid-80's, when there was a big buzz about them. They put on a steamy show led by singer/harpist Mark Wenner and guitar player Jimmy Thackery. Only Wenner remains of the original quartet all these years later, but that high quality and intensity still remains on this latest disc. Never purists, instead the group is happy to throw a lot of styles out there, as long as has that electric energy. Case in point, this disc ends with the beloved Dirty Water by The Standells, harped-up but still retaining the garage rock feel. I can't think of another blues band that has claimed that tune. Same goes for the Jesse Winchester cut Isn't That So, bringing more of a roots sound to the fore.

There's no short-shrift to true blues either, with the group's strong originals, such as drummer Mark Stutso's VooDoo Doll, and Wenner's mellow instrumental Blues for Brother John. And the band knows how to make those old rent-party blues numbers like Willie Dixon's I Want To Be Loved just as danceable as it was in the day. It's good to know the Nighthawks still wear the team colours with pride.
Posted by Bob Mersereau at 10:06 PM