MUSIC REVIEW OF THE DAY: ELVIS PRESLEY - A BOY FROM TUPELO 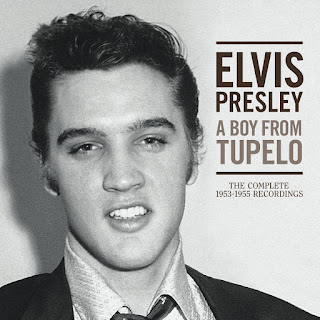 Here's an excellent way to listen and learn all about the beginnings of the King. This 3-disc set examines all his known recordings from the crucial Sun Records period, from his first two $3.98 vanity booth recordings to his remarkable sides recorded by Sam Phillips, to the incendiary live shows that he put on across the South. Crucially, a 120-page book features a day-to-day timeline that takes Elvis from the first rehearsals with Scotty and Bill to sale of his contract to RCA at the end of 1955, when it all went crazy.

What the combination of the music and book lets us do is explore how that magic came about, the almost-accidental creation of this unique brand of rock 'n' roll. Presley was a talent, but not an obvious one, and certainly Phillips and others had their doubts. Yet Phillips stuck with him, listening to his affected crooning through years-old ballads. Finally on a lark, Elvis, Scotty and Bill started goofing on That's All Right, an eight-year-old cut by Arthur Crudup, and in their foolishness turned it into an uninhabited combination of rhythm and blues and country. All Phillips had to do was slap on the slapback echo.

Disc three, which features scratchy concert fragments from October 1954 to October 1955, shows us what happened when that sound got out in the public. The worldwide hysteria was yet to come, but certainly those crowds knew something was up. These are taken from radio station concerts, including the famous Louisiana Hayride, and even the disc jockeys interviewing Presley knew how different the sound was, and how the game was going to change. Because he was white, he was still operating in the country world, but they were soon going to have to invent a new category for him and the many that would follow.

These live cuts are remarkable, both for the excitement, and for the fact they exist at all. Most have been transferred from the only copies of acetates (one-time only recorded discs, notoriously flimsy), and have had to be painstakingly doctored to save the fragile recording. One acetate was even destroyed during the process. As such, the quality is far less than hi-fi, but this is all about history.

Sadly, the outtakes found on disc two don't really add much to our knowledge. There are no eureka moments, and many of the original session tapes were destroyed, taped over and even thrown out in the transition of ownership from Sun to RCA. As hard as it is to believe, RCA cleaned out their vaults in 1959, discarding completely unreleased songs, now lost to history. These are mostly breakdowns, takes that start and stop after a mistake is made, and as such a bit dull to wade through.

The magic is disc one, featuring the original Sun sides, which get more and more exciting as Phillips and the trio figure out the kind of songs that work for them, including Mystery Train and Good Rockin' Tonight. Disc three is great to have for anyone who likes to study big bang moments in music, and the book is just fantastic, filled with stunning photos, jaw-dropping facts and the kind of interesting minutiae collectors love.
Posted by Bob Mersereau at 9:56 PM