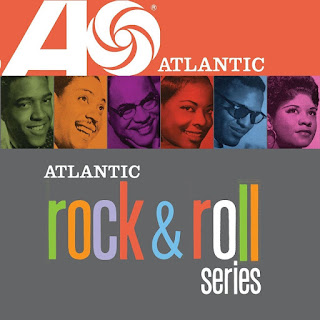 The folks at Atlantic Records were getting frustrated in 1956, watching some of their R'n'B sounds, and even the songs themselves being grabbed by this upstart rock 'n' roll music. Big Joe Turner's Shake, Rattle and Roll had been co-opted by Bill Haley for one of the biggest hits of the new genre, and while the label's artists were doing just fine on the R'n'B charts, there was much bigger money flowing in rock 'n' roll. So when the company decided to move into the LP market that year, they set up a division for their "popular" records (i.e. non-jazz), and that included a "Rock & Roll Series."

Six albums by six of the label's main stars were created for the series, and have become both collector's items and standard-bearers for the Atlantic sound over the years. Now the six have been reissued in a handy boxed set, at a very handy price, $36 bucks at last check. There aren't a lot of frills, just a slim book and the original decent biography liner notes on the covers, but it's the music that matters here. The six featured are Clyde McPhatter & the Drifters, Ruth Brown, Turner, Ray Charles, LaVern Baker and Ivory Joe Hunter. Each set includes their biggest hits to early '57 on Atlantic, which means some pretty major music indeed. None of these albums really qualified as rock & roll, but you could sure hear the roots of it.

McPhatter's tenure with the Drifters predated their big Top 40 successes, and they were a largely different group, as he was considered the premiere voice of gospel-infused popular music of the day. They had great vocals grooves going on with songs such as Money Honey and Honey Love, and the surprisingly fun and funky take on White Christmas is a nice addition. Ruth Brown was the label's biggest star of the day, the acknowledged queen of R'n'B with hits such as Lucky Lips and Teardrops From My Eyes.

Joe Turner's style was infused with Kansas City blues, and he gave us the immortal Flip, Flop & Fly, Honey Hush, and the more folk-styled Corinne, Corinna, later a pop hit and a song covered by Dylan. Ray Charles, for my money and many others, was at his very best at Atlantic, and that includes here Mess Around, Drown In My Own Tears, I Got A Woman and Hallelujah I Love Her So.

LaVern Baker was grittier than others, best heard on Jim Dandy, and the rollicking, huge hit Tweedlee Dee. Ivory Joe Hunter was the most sophisticated and pop of the batch, crooning his way with Since I Met You Baby and Heaven Came Down To Earth. If you're new to Atlantic, this is a great place to start, and if you're a fan, it's a fine way to make sure you have all these classic sides.
Posted by Bob Mersereau at 10:37 PM