MUSIC REVIEW OF THE DAY: WAYNE NICHOLSON & THE EASTENDERS - DIGGIN' THE DIRT 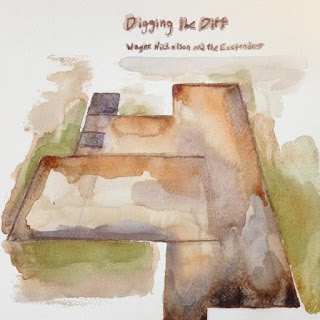 While Celtic and trad and folk and country get mentioned a lot as the core sounds of East Coast music, the foundation of the scene largely happened in the '70's, when the circuit of venues around the Maritimes was established and a gang of bands were in place to put bums in seats. By and large, the sound of those bands was blues-rock, and it's never really gone away. One of the big names, and big voices of that genre is Wayne Nicholson, who was with Truro's Horse, then lead singer for Oakley into the '80's, before going solo. He's now back with this group of veteran players, lured back into the game by a successful weekly matinee gig at Monte's in Dartmouth.

Nicholson got asked to do that slot about three years ago, and eventually the players evolved into a band, The Eastenders, that he just had to get recorded. The band features Brian Bourne (Rawlins Cross) on Chapman Stick (think bass-plus), James Logan (Drum!) on guitar, and Doug MacKay (Sam Moon, Minglewood) on drums.

In case you haven't heard him, Nicholson possesses one of those remarkable set of lungs that have always been the great weapons of the blues rockers, from Paul Rodgers to Steve Winwood to Robert Plant, just full of volume and energy, enough to keep up with a powerful trio. And once you have the right four people, there's an undeniable power. The next step is the right material to dig into, and I think the group has done a solid job picking the songs, including some surprising choices.

The album opens with a somewhat obscure Gene MacLellan track, Won't Talk About Love, and the group looks at the dark edge in the song. An older Johnny Lang track follows, and the Eastenders show they can get a groove on for Stop Pushin' On Me. There are only a couple of classic blues, the standard Key To The Highway, and the old Depression number Nobody Knows You When You're Down and Out, both showcases for Nicholson's expressive side. Harder numbers such as So Far So Good let Logan sizzle on guitar, and the most fun choice is a radical remake of Dylan's Watching The River Flow, which keeps the humour but toughens up the tune. It might be just one interpretation of the term, but to me, this feels like Maritime roots music.
Posted by Bob Mersereau at 10:04 PM