MUSIC EVENT OF THE DAY: 5 SHOWS TO SEE AT THE LARLEE CREEK HULLABALOO 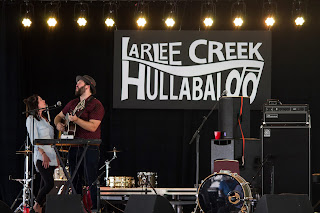 My favourite Little Festival That Could, the Larlee Creek Hullabaloo is coming up, happening Aug. 09 - 13 in Perth-Andover.  The festival is held partly around the village, while the main shows, Friday and Saturday, happen on a absolutely gorgeous part of the Saint John River, with talls hills on both sides and the concert site snuggled in the valley between.

This is the 10th year for the festival, which each year features one of the best-curated lineups around, especially impressive for a small community a bit out of the way.  They draw mostly on East Coast talent, always are on the lookout for rising high-quality performers, and keep room for one or two Upper Canadians to tempt to the area.  If anything, they've outdone themselves for the 10th anniversary, so here are five shows that I don't want to miss.

If you buy one of the early bird passes for the full weekend mainstage shows, at the crazy low price of $65, you get a free ticket to a Thursday night show at the Castle Inn, featuring Toronto's Samantha Martin & Delta Sugar.  I caught this group a couple of years ago at the Harvest Jazz & Blues Festival, and was blown away by their gospel/blues/soul mix, raw music and powerhouse vocals and harmonies.  Seeing them in a small venue will be intense.

These Halifax favourites started out soft but pumped up the volume in the last year, adding drummer Clare Macdonald and switching out some of the acoustic instruments for electric ones.  That's paid off with a dynamic stage show, and rep as a must-see East Coast act, including winning at the Canadian Folk Music Awards and East Coast Music Awards.  Fans love 'em.

The first time Campbell played this festival, she had just released her first, independent album and doing a small acoustic set for early risers.  But she impressed everyone with a fantastic voice, awesome guitar and winning personality.  Now, she's just released her second disc, Roller Coaster, produced by Classified and Blake Johnston, and returns to the Hullabaloo with her full band to rock the main stage.

4. Pretty Archie on a boat!

One of the highlights of the festival is the chance to take a boat cruise on the Saint John, while being entertained by one of the main groups.  And seriously, the boat trip alone on that stretch of the river is worth it.  Hearing Cape Breton's folk/bluegrass faves Pretty Archie makes it pretty perfect, the ideal music for a hopefully sunny Saturday on the river, starting at 11 a.m.

5. Gordie MacKeeman & his Rhythm Boys on the Main Stage Saturday

I saw Gordie and the guys last weekend, and it was stellar always.  They do a high-energy, tremendously fun show, really entertaining in the best sense of the word.  Gordie blows you away as soon as his steps on stage with his crazy legs and flying bow, but at the heart of it is a true passion for fiddle music and that great tradition in this here land.  Even if you think you don't like fiddle music, after seeing this group you'll never say that again.

Rats, I only get five?  What about The Wooden Sky? Ria Mae?  Minglewood? Erin Costelo?  The Big and Little Hullabaloo's?  Stupid listicles.  For tickets and info, check out www.larleecreekmusic.ca.
Posted by Bob Mersereau at 9:53 PM