MUSIC REVIEW OF THE DAY - A&M 50: THE ANNIVERSARY COLLECTION 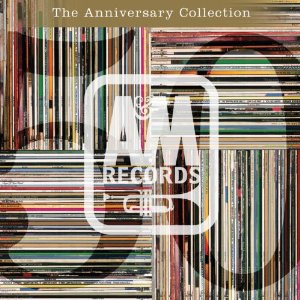 Hey, nice set here celebrating the little label that became a major.  Started by trumpeter Herb Alpert and Jerry Moss to release Alpert's instrumentals, the cash flow came quickly in the 60's thanks to monster Mom and Dad hits by Herb such as The Lonely Bull.  His albums were huge sellers, Top 10 for months.  That let the new moguls move into rock, jazz, whatever, and even take lots of chances, which is a rare thing these days.

A triple set, disc one is called AM to FM, and features lots of major hits, many in the easy-listening category:  The Carpenters' Close To You, Rita Coolidge's Higher and Higher, Human League's Don't You Want Me, up to Sheryl Crow's All I Wanna Do.  Disc two is A Mission To Rock, and you'll find classics, grand experiments that worked, and stuff that sold buckets, critics be damned.  The Police and Squeeze were both British imports, the former going over great guns in North America, while the latter were certainly cult faves at least, and an example of an important risk that brought great music.  Moss heard all the buzz about Gram Parsons, and signed up the Flying Burrito Brothers; while they never made much money (if any), we can thank A&M for that cosmic country legacy still being felt.  Soundgarden is here too.  So is Peter Frampton.  That one must have filled the coffers for years.  Disc three is a catch-all, called Soul, Jazz and More, and might just as easily be termed African-American music, with Janet Jackson, L.T.D., Billy Preston (Will It Go Round In Circles -yes!), Aaron Neville, plus Jobim and Mangione, following founder Herb's style.

Long swallowed up by the mighty corporations, A&M is just a tiny part of Universal these days, but for awhile in the 70's, it certainly meant something.  Mostly, it meant money, because if they signed you, there was a darn good chance they would find a way to break you big.  Just ask Bryan Adams.  He's here with Run To You.  So is a track off the first album I ever bought, Humble Pie's Thirty Days In The Hole, from Smokin'.  Joe Jackson, Joe Cocker, Joan Baez, Captain & Tenille, no matter your tastes, you probably own A&M records, and quite a few of them.
Posted by Bob Mersereau at 4:44 PM