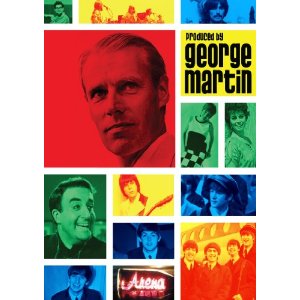 If you think George Martin's career started and finished with The Beatles, this will be a big eye-opener for you.  The most successful music producer in history was a lot more than just the man behind the studio glass.  Would he have become famous, or even important, without the talented group that fell into his lap?  Hard to say, but he did do a whole lot of interesting things before Brian Epstein got in touch with him.  And don't forget, he didn't just produce them.  As the head of the comedy, light jazz, and Scottish country dancing label Parlophone, he had the ability to sign the Liverpool group.  After an audition, he said yes, where other record companies said no.  Luckily, they all worked well with each other.  So well, that Martin became an integral member of the studio group, feeding them ideas, arrangements, and new technology.

But its the years before that make this documentary work, as we find out about the young Cockney lad who went to war as part of a bomber crew, and who loved playing piano.  In a succession of strokes of luck, he landed a job at EMI, eventually given the weak sister Parlophone label to run.  Knowing he had to do something drastic to make it a success, he started to record comedy, including the legendary Goons, Peter Sellers and Spike Milligan.  Then there were the eccentrics he brought in, including Australian singer Rolf Harris.  The label was indeed growing, but rock 'n' roll was coming by then, and Martin was looking for a band for his label.  It's a great story.

It's also put together really well.  There's no narrator, and only brief on-screen script.  For the most part, it moves along with Martin speaking in interviews, and often with the interviewer with him.  Smartly, there are several; his son Giles starts things off, learning about his upbringing.  Python's Micheal Palin talks to him about the comedy albums.  Ringo and then Paul arrive, to chat about the war years.  It's marvelous to see how easily they chat, true friends loving the memories of their work together.  Cilla Black, Harris, Jeff Beck, and others pop up at appropriate times.

It's not a straight chronology though; at one point we skip ahead to see Martin talking to a group about hearing loss.  He's an officer of a major charity, due to his own partial deafness, and it is inspiring to see him working hard for it, and quite proudly, instead of bemoaning the sad irony of the loss of his legendary ears.  The most enjoyable part of the documentary is that it doesn't dwell on the well-known stories of the Beatle years.  For the most part, we get discussions of how Martin influenced the group, working in tandem, and truly re-inventing the job of record producer.

The documentary does trail off after the Beatle years, although there were plenty of successes, from Beck, America, solo McCartney, Jimmy Webb and more.  Of course, what could match the Beatle years?  What we do see is a very remarkable, and quite lovely man, seemingly grounded and much more than the man behind the glass.
Posted by Bob Mersereau at 7:24 PM