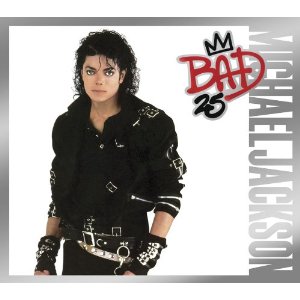 Imagine having to make an album that you already knew would be considered not as good as its predecessor even before anyone had heard a note?  I mean, how could you follow up the biggest-selling album in history?  Thriller was not just a smash hit, it was largely a critical one as well, and a social one:  it had integrated MTV after all, and the videos created had also placed Jackson at the top of that art form as well.  Most of the bizarre behavior hadn't happened yet, or at least was only chuckle-inducing.  The world was watching intently to see how Jackson could possibly top himself.

Bad turned out to be a very serious attempt by Jackson to prove himself again, to reach yet another record.  There was no cartoon material, such as Thriller's title track.  Instead, he wanted to tackle heavier themes, more in line with Billy Jean, and a good love song would be as light as he would get.  This would be a grown-up disc.  Of course, it would groove as well.  Jackson must have figured he had the kids already, and he'd show everybody else who's bad.

Jackson was also all about hype and drawing attention to himself, and perhaps this worked against the album a bit.  Media stories and pre-internet chatter focused on his look, the biker-chic leather and silver clothes, and his now-obviously lighter skin.  More ink was spent describing the videos than discussing the songs.  See, I'm at it again!  Three paragraphs in, and not a mention of a song on the disc.  Jackson was now selling records because he was famous, always a dicey idea.

Chart records seemed to matter more than the music.  There were five straight #1 singles, but by the forgettable Dirty Diana, a large part of the throng that had bought Thriller had lost interest.  Track-for-track, it didn't have the staying power of Thriller.  Not to say Bad doesn't have its moments.  Lead single I Just Can't Stop Loving You is a fine love ballad.  The Way You Make Me Feel is a great dance track, something at which Jackson continued to excel.  As a big social number, Man In The Mirror is a pretty intelligent way to talk to the masses, and Jackson knew his songs would be scrutinized, and would also affect the way many of his young fans would think.  That alone is big stuff to carry on your shoulders.  No wonder he ended the album with Leave Me Alone, addressing the non-stop paparazzi campaign aimed at him.  But secondary singles (Smooth Criminal) and album cuts (Liberian GIrl, Speed Demon) didn't ignite.

This anniversary edition contains a complete second disc of demos cuts, remixes, and for those linguists, Spanish and French versions of I Just Can't Stop Loving You.  Those are surplus, but the remixes of Bad are pretty good, probably micro-managed by Micheal although Afrojack was supposed to be in charge.  The bulk of the disc is made up of eight polished demos, six of them previously unheard, and none of them on the album.  The way Jackson made demos was how most people made final masters, so these are almost-complete new songs.  Yet the lyric concepts weren't there, and he knew it;  these were made really well, but made to be taken to a further collaborative stage, with producer Quincy Jones for instance, to discuss, and in some cases, stay on the shelf for now, or even completely reject.  The big find is called Song Groove, but is also known as Abortion Papers.  Jackson was trying to take on another controversial subject in the same way he'd done with Billy Jean, keeping the beat without taking sides or preaching.  He had the storyline, and the music, just not the final lyrics.  Its an interesting way to hear works-in-progress, and there's some good music here, but without the final words, they leave you empty.  I can't see people playing these more than a couple of times.  I'd rather hear an acoustic guitar demo of something, but that's not the way Jackson worked.

In the end, Jackson tried very very hard to come up with the songs, the videos, the image, everything.  But guess what?  Bad wasn't as good as Thriller, and you can't follow-up the biggest-selling album in history.  Jackson was perceived as trying to do just that, and hyping it up when it wasn't as big.  Ultimately, that hurt.
Posted by Bob Mersereau at 6:10 AM