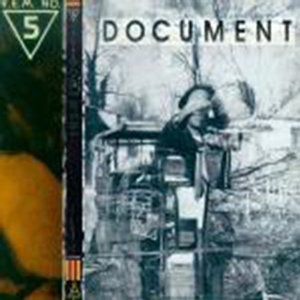 The one where Michael Stipe stops mumbling, and REM gets a Top Ten hit.  With the band now dead, the sumptuous reissue campaign continues, with album five receiving the now-standard two-disc treatment, with a deluxe box, postcards and a huge friggin' poster filling it up.  Ignore the finery, it's just for show, but enjoy the extra disc.  This time, there are no demo sessions; instead it's a full 80-minute live show from Holland, recorded two weeks after Document's release, and heavy on the new cuts.

Document was a heavier album, as the group confirms in quotes in the liner notes.  Not only did they try to get heavier as a basic rock band with guitar, lyrically they were bummed about the state of the U.S., with Reagan Republicans and high finance thieves running amok.  At the same time, a mighty sea change was happening in music, and the band found themselves at the leading edge.  Alternative was about to go mainstream, and the band was making its changes at the right time.  They felt it, and went for it, with Stipe's vocals now pushed to the front of the mix instead of buried just below understanding.  Led by The One I Love, suddenly the college band had crossed the threshold into stardom.

Overall, the original album is one of peaks and valleys, with tent-pole tunes Finest Worksong, It's The End Of The World As We Know It (And I Feel Fine), and The One I Love standing out for their energy.  There are other strong ones that have stood the test of time, Exhuming McCarthy and Disturbance At The Heron House topping that list.  But others don't have the clout or the melody, and despite the more the confident lyrics of Welcome to The Occupation and Oddfellows Local 151, they haven't made anyone's mixtapes lately.

The live album is a grander snapshot of the upwardly mobile times for the group.  All of a sudden they were a group with hits, old favourites, and an excitement.  It's a group about to blow, and nothing's more exciting for an audience, you just know when you are there.  Certainly that evidence is here, especially in the inspired guitar of Peter Buck, the harmonies of Mike Mills, and the overall feeling they are going for it.  Stipe even explains the story behind Life And How To Live It, and the set is designed for peak moments and the introduction of the new songs.  The best moment comes at the end.  For a final song, we get a much softer version of So. Central Rain, toned down to be a benediction.  It's great to have these radical departures come out on deluxe editions, and it makes it worthwhile to upgrade.
Posted by Bob Mersereau at 3:57 PM