MUSIC REVIEW OF THE DAY: CONCERT FOR ST. STEPHENS 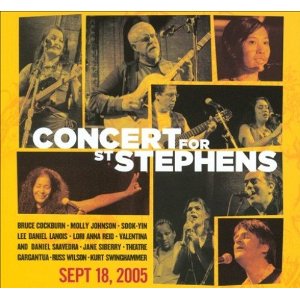 A 2005 concert recording, just now seeing the light of day, but with a difference.  This was a benefit for a historic community church in Toronto, 147 years old at the time, and facing a financial crisis.  A volunteer committee quickly came together, with everyone from the performers to the tech crew to the production staff donating their time.  It was a big success, the church survived and continues its strong community involvement to this day, with shelter and food programs among its works.  The release of the disc now will support these on-going efforts from the Kensington Market church.

There's a community tie to most of the performers as well, with the local and well-known folks that took part.  Molly Johnson, a downtown fixture, gives a topical reading of God Bless The Child, and another longtime resident, Jane Siberry does a combo spoken-word, two song set.  Performance players Theatre Gargantua started out performing in the church's artist spaces.  There was even an actual (former) parishioner, none other than Bruce Cockburn, and his 3-song set is a highlight here.  First, there's a rare reading of his earliest well-known number, Goin' To The Country, which is a grand treat.  2005 was right when Cockburn was showcasing his guitar chops on the all-instrumental Speechless album, so we get some of his nimbleness on King Kong Goes To Tallahassee.  The set is wrapped up by Tried And Tested, from his You've Never Seen Everything disc.

The other major artist here is Daniel Lanois, doing a one-off set with singer Lori Anna Reid.  She takes one song, proving herself a fine vocalist, and then she harmonizes with Lanois on two of his biggest numbers, The Maker and The Messenger.  These are always grand songs to hear, and with those numbers, and the Cockburn mini-set, its a nice hour of listening for any fan of these folk.
Posted by Bob Mersereau at 6:46 PM