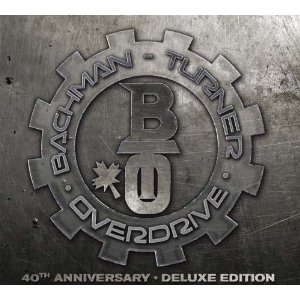 This is an interesting double-disc set, sort of a catch-all collection that features some greatest hits, some unreleased stuff, a couple of rare ones, and a complete live album.  It's a very generous, two hour listen, and nicely sums up the group.  Some of it is great, some of it is okay, and there are even some clunkers.  Or as Randy Bachman himself puts it in the liner notes, "Gathered here are some of those best and not so best moments...".  This wasn't art, it was meats-and-potatoes rock, the amps at 11 and the guitars set to dumb.  When it worked, it worked perfectly, with Takin' Care Of Business and You Ain't Seen Nothing Yet two of the iconic rock songs of the 70's, requiring little thought to enjoy, as opposed to the prog rock and singer-songwriters getting all the press in Rolling Stone.  BTO played blue collar rock in a blue collar way, touring endlessly, pumping out albums, and being good old Canadian boys with no pretense or hope of being glamorous.

It's a great story, and told really well in the lengthy liner notes supplied by Bachman biographer John Einarson, also one of the compilers of the set.  Every similar retrospective should have such extensive booklets, it's one of things that makes physical copies of discs still desirable to music fans.  Bachman had famously quit The Guess Who at the peak of the group's success, as American Woman topped the charts, wanting a new musical direction.  At first he tried it with the new fad of country rock, but the group Brave Belt never caught on.  That band morphed into BTO when Fred Turner joined and helped them rock out, with his booming voice suitable for nothing less.  Then Bachman's work ethic and pop instincts kicked in, and against the odds the group rose to the top, becoming one of the biggest-selling yet under-praised bands in the world.

The two big hits are the ones that get all the attention from classic rock radio since then, but there are actually a handful of fine ones, including Let It Ride, Hey You, and Lookin' Out For #1.  That last one showcased Bachman's actual full talent, as he got to play some of his beloved jazz licks, his true favourite music.  But Turner-fronted hard rockers Not Fragile and Four Wheel Drive had more of an impact with the kids.  The non-hit tracks on the first disc include a Brave Belt number, Never Coming Home, showing the Creedence boogie they were attempting.  Then there's a very odd interpretation of The Box Tops hit, The Letter, which is changed into CSNY's Southern Man for some reason.  There are also a few cuts from various 80's attempts to bring the band back, of varying quality, the best of them being a cover of the classic Wooly Bully, which might have been a hit except it's from a movie soundtrack no-one has ever heard of (American Boyfriends, 1989).  Oh, it was a Canadian film, that's why.

Disc two is, um, gosh.  Well.  The most important thing I can say about it is that this is the first appearance on CD of the Live In Japan album.  And, there are two previously unreleased cut added to it.  Oddly, for a band that made their name by touring and thrilling fans with their live show, it's not a very good show.  Much of the problem seems to be in its lengthy cuts and instrumental parts, which may very well have worked for the live crowds, but not at home.  It also includes the dreaded drum solo.  I mean, really.  "Hey, you should check out this new live album, it has an amazing drum solo on it," said no one ever.  Plus, shouted out to the Japanese audience, most of whom wouldn't have understood a word, is the dumbest stage slogan in rock:   "Wherever you go, whatever you do, do it in Four Wheel Drive".  It is nice to hear Blue Collar in the set list, and Bachman does get to show off some of his gorgeous jazz playing, but really it's a one-listen item even for the biggest fans.

Most of the essential BTO songs are here, so if you are just looking to get the hits, this does the trick.  If you want to dig deeper it does that, too.  Mostly though, I recommend this because it's a well-thought out collection, of a historically important Canadian group.
Posted by Bob Mersereau at 8:50 PM