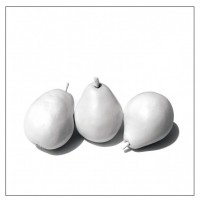 In which our boy returns, after a lengthy absence, 2005 for an album of new material, 2007 for the Dwight Sings Buck collection.  But is it with hat in hand?  Hell no, he hasn't changed, but maybe you have.  Cool as a cucumber, Yoakam does his Buck Owens twang, Elvis rockabilly, and hurtin' ballads just as strong as always.

No matter the music, Yoakam always finds or writes smarter-than-your-average-bear adult country, with mature, flawed romance often the theme:  "I've lusted for love but lust is so blind/and trust for a heart is a hard thing to find/But what's left of yours might help to heal mine."  He can also have fun and take the words way past the usual country barriers, such as the title cut, which isn't about pears at all.  Instead, it's about three pairs of glasses, that might refer to a broken family ("three pairs of shoeless feet"), but it's a partial glimpse of some life, and has a sleek modern production, more like an Elvis Costello song.  Waterfall is tune that points out that we don't need all of the contraptions and more money, we need more love of life to be happy:  "If I had a waterfall?we wouldn't wonder not at all/How much fun each day was gonna be."

Those are songs that set him apart, but its when he cuts loose on the basic stuff, you really get his value.  I appreciate all the Americana and No Depression folk that do alt-country, but how about, you know, real country guys that get it and do it well?  Hearing Yoakam romp through a cover of Dim Lights, Thick Smoke makes me long for Dave Dudley and all that stuff that used to rock country music from people you know that meant it.  Yoakam has always, and still, means it.

Posted by Bob Mersereau at 9:08 AM