MUSIC REVIEW OF THE DAY: GRAHAM PARKER & THE RUMOUR - LIVE AT ROCKPALAST 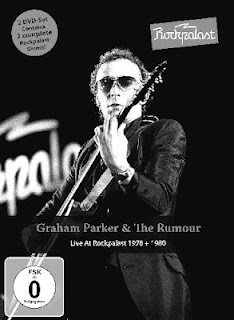 Good timing on this one.  Parker has just announced he's back with The Rumour for the first time since 1981, has recorded a new album, and will be doing a big U.S. tour with them this fall.  GP and The Rumour were one of the most explosive live acts of the late 70's, a R 'n' B-rock unit that spat out Parker's unique blend of vintage soul, Van Morrison and angry England.  But Parker moved a bit more into jagged rock in the 80's, and the troupe split after The Up Escalator album.  Fabulously, it's the complete original band reforming, and I can't wait to hear the results.

Meanwhile, this is a tasty double-DVD package (also available on CD), from the venerable German TV show Rockpalast, part of a new series of releases from the show's vault.  Those blessed folks would record the whole live show, and broadcast it across Europe.  Compare that to TV in North America, where concert shows usually had two or three songs per act, edited.  There are already several Rockpalast shows out, and I'll review more of them in the days ahead.  But this baby was top of the pile for me.  There are two shows, from 1978 and 1980.  And what a difference between the two.  The earlier one showcases the group in its pure R 'n' B phase, songs from the Howlin' Wind and Heat Treatment albums, complete with a four-man horn section.  The latter show sees all but one song from The Up Escalator played, along with a handful of Squeezing Out Sparks numbers, and little from the earlier discs, with the emphasis on punchy choruses and sharp guitars.

It's interesting to watch Parker as a front man in these days, with his big sunglasses barely hiding the piercing glare from his eyes.  He means business, and is deadly serious about these songs.  This is love as the most important thing in the world, worth fighting for, and often a nasty piece of work.  As he sings, "Nobody hurts you harder than yourself".  Even when the tunes themselves are relatively happy, such as Heat Treatment, the band tears into them like they're fighting for their jobs.  They were going to conquer the audience with this music, no matter what was currently in style.  The 1980 show is longer, as Parker had had a hit with Squeezing Out Sparks, affording him an 82-minute set, and a cheering crowd.  The group and horns have to win over the first audience, but it doesn't take them long, and the 60-minute show zips by.  While it's all grand, I'm most impressed by the 1980 set, because it shows just how strong The Up Escalator tracks were.  Sadly, the album tanked, his upward momentum stalled, and name-brand stardom eluded Parker.  Wait though, maybe not so sadly; for my money, his albums have been consistently excellent, although low-key over the past decade.  Maybe fame would have changed that, and what's truly important is the art.  Anyway, lots of it here.
Posted by Bob Mersereau at 7:14 PM