MUSIC REVIEW OF THE DAY: WHITEHORSE - THE FATE OF THE WORLD DEPENDS ON THIS KISS 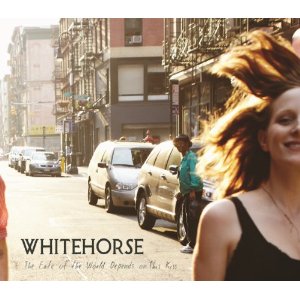 What I like most about this album is what they didn't do, or settle for.  With two talented singers and performers, Whitehorse could be yet another acoustic-Americana duo, doing modern folk and roots.  Well, that's there, but it's all shot through with gutsy guitar and sonic experiments.  Luke Doucet doesn't shy away from putting down a nasty, noisy line smack-dab in the middle of sweet harmonies with Melissa McClelland.  The drums boom, aren't being tapped.

McClelland's no chipper customer either, at least not primarily.  Cold July brings down the normally-happiest month of the year, wobbly piano behind a languid vocal.  Continuing with the monthly theme, Out Like A Lion switches things on that old March proverb, because she's contrary.  So's Doucet's distorted and mangled solo, the duo just refusing to let this all be pretty, which it could easily be.  Mexico Texaco is probably too slow to gather any airplay, but I love it, it's a dark road story, all close harmonies and claustrophobia.  "Why can't I take this car and drive it to Mexico/We'll rob a Texaco outside of Santa Fe/where we'll run out of gas."  Somebody phone David Lynch, his next screenplay is written.

Now, this isn't to say these songs aren't catchy.  There are plenty of bright moments and cool harmonies, and what makes it even better is how interesting each one is, with a smart story and surprising additions to the standard sounds.  Also, each one has something rarely heard these days; intrigue.
Posted by Bob Mersereau at 8:57 PM