MUSIC REVIEW OF THE DAY: JUST TELL ME THAT YOU WANT ME - A TRIBUTE TO FLEETWOOD MAC 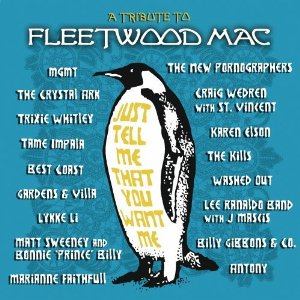 It surprises me that so many indie artists are into Fleetwood Mac, given the monumental popular success and excess the band was responsible for in the late 70's.  Multi-millions in sales were matched with exorbitant recording costs, months in the studio, and rich rock star behavior.  Yet here we have a whole team of hipsters lined up to pay tribute.  It's also at least the eighth such tribute album released in the past couple of decades.

What's cool with this disc is that it's not just the modern folks here, but some veterans too.  They also tackle the early, bluesy days of  the pre-Buckingham and Nicks version of the group, with Peter Green and Bob Welch tracks showing up.  Lots of women too, but for some reason the Stevie Nicks tracks are favoured over the Christine McVie ones.   The old school is led by a grand and dirty take on Oh Well by Z.Z. Top's Billy Gibbons, for my bucks the best cut of the 17 on the disc.  MGMT turn Bob Welch's Future Games into something electronic, with lesser results.  Lee Ranaldo and J Mascis try to turn Albatross into guitar noise, which really doesn't work.

And so it goes once we get to the hit-making days, some cool interpretations, some experiments that don't work.  Antony does a beautiful Landslide, as always his voice sublime when he finds a strong melody.  The New Pornographers do a fun pop/alt production on Think About Me, proving that at heart, the group is old-school Top 40 inspired.  Marianne Faithfull is somehow sounding younger and less growly on Angel.  The Kills kill Dreams, making it an ugly thing, and The Crystal Ark wants to be weird on Tusk, but fail to realize you can't out-weird Lindsey Buckingham.  So, a few highlights, a couple of clunkers, some space fillers, your basic tribute album.
Posted by Bob Mersereau at 9:00 PM