MUSIC REVIEW OF THE DAY: ART GARFUNKEL - THE SINGER 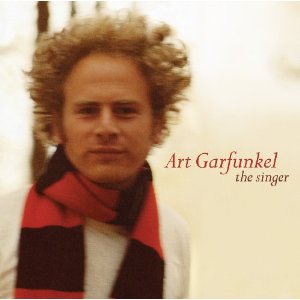 Art gets the bum rap, huh?  Paul did all the writing, played guitar, sang, and kept having solo hits.  Art just sang.  Woah there.  So what's so bad about being a great singer?  Beautiful pipes, you have to admit.  Now, he is a bit of a mellow fellow, and rarely rocked, let alone rolled.  Still, if you're in the mood, and can chill, Art's done a lot of fine work over the years.

This two-disc career retrospective is the first one that captures most of his highlights.  There's only a few from the S&G years, the ones that truly show his stuff, such as the original 1964 version of The Sound Of Silence, before producer Tom Wilson gave it the folk-rock treatment by overdubbed drums and such.  It's book-ended with perhaps his greatest vocal, Bridge Over Troubled Water, sung so perfectly even Lemmy from Motorhead must love it.  But it's the 70's where you might find a few surprises that charm you.  Albums Angel Clare, Breakaway and Watermark all hold interesting cuts from strong adult pop writers including Jimmy Webb, Bruce Johnston, and Gallagher-Lyle.  After Glen Campbell, Garfunkel may be Webb's best interpreter, with five cuts here (although not the excellent Crying In My Sleep, for some reason).  Garfunkel picked the songs himself, and thankfully he did collect the duet and trio singles of the era:  My Little Town, with Simon, (What a) Wonderful World with Simon and James Taylor, and Crying In The Rain, with Taylor.

The 80's weren't kind to Art, and he has to dig deep to find much from those days, and a truly awful version of When A Man Loves A Woman from 1988 shows that he's way too white to handle soul.  But then a funny thing happens with the latest works featured.  In 2002 Garfunkel started working with producer/singer/writer Maia Sharp, who has also written for Bonnie Raitt, Keb' Mo', The Dixie Chicks and others.  Two cuts from then, and two brand-new ones are all strong, and even have a groove to them.  Geez, 70 years old and Art's getting funky.  If you have a soft side, this is about three-quarters fine and dandy, and a worthy overview.
Posted by Bob Mersereau at 10:29 PM