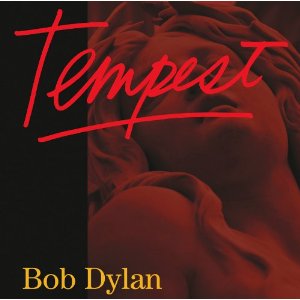 The return of the gravelly-voiced bluesman, or the New Dylan, the one who emerged in 1997 with Time Out Of Mind, but really solidified the new style with 2001's "Love and Theft".  As with album, and the subsequent ones, Dylan produces himself under the Jack Frost alias, and features his touring band plus a special guest or two.  For the most part, the music and lyrics sound as if they come from a time before the mid-60's, the music he loves the most.

Duquesne Whistle, the lead track and first single, shuffles along at a pleasing pace, a happy groove that gives the impression this could be a (gasp!) good mood album.  Soon After Midnight is a country love ballad, in the Patsy Cline school, with a few simple rhymes of that time:  "I'm searching for phrases/to sing your praises/I need to tell someone".  Of course, he can't let it all be sweet, as a girl named Honey steals his money, Charlotte is a harlot, and Two-Timing Slim has his corpse dragged through the mud.  Even with that, it still feels upbeat.

Narrow Way is an electric blues, and it sounds like all those years of playing Highway 61 Revisited on the road has Dylan and the band happy to do back in that groove.  Hey, nothing wrong with that, it was a damn good blues back in '65, and it is quite impressive he can still write in that style when he feels like it.  There's been about a billion people asking him to do just that for forty years.

Early Roman Kings is another blues shuffle, the Muddy Waters-Mannish boy form, with Dylan's keyboard mimicked by Los Lobos' David Hidalgo on accordion, a guy who's become a regular on recent albums.  This one has another classic lyric, with some slick gangster types:  "They're lecherous and treacherous, hell-bent for leather...sluggers and muggers/wearing fancy gold rings/all the women going crazy/for the Early Roman Kings".  These last two are going to be great in concert.

It's not a perfect album;  Tin Angel is a love triangle gone very bad story, with Romeo and Juliet results, but at nine minutes and no melodic shifts, it becomes a dirge.  Title track Tempest will be the source of much debate, with its Titanic story, an appearance by Leonardo DiCaprio, and almost 14-minute length.  I just have one question about it:  Why?  It doth perplex me.

It also amazes me, and brings me great joy, this latest Dylan.  How does he keep coming up with these fascinating albums, which defy almost every convention, yet still sound and feel so great?  You can pick 'em apart, starting with his voice, accuse him of anything from laziness to plagiarism to craziness, but nobody else sounds anything like this in total.  Once you're hooked to this Grey Power era of Dylan, it can be as rewarding as his prime.

Posted by Bob Mersereau at 6:16 AM