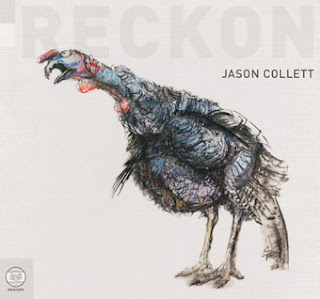 Collett's in a mellow mood here, largely influenced by the economic collapse and the resulting Occupy Movement, with which he identifies.  He's stated for all that the album is primarily about loss, that of illusion, of faith in institutions such as banks and government, and specific hurts, like the loss of homes and jobs, as he's seen while on tour.  Now, that can lead to some down lyrics, certainly thoughtful ones, but he's done a good job in keeping a balance in the tunes, some rocking out, and the themes coming out as tough, and therefore rocking, as well as the sombre stuff.

As a big statement, Reckon's subject matter is handled with a lot more subtlety than, say, Springsteen's latest.  I get a better sense of the characters and their personal hurt here than I do in the oddly-detached Wrecking Ball songs.  Maybe it's because Collett's closer to the age of the majority of the Occupy protesters.  But also, he just does a better job with the words.  I Wanna Rob A Bank pretty much sums up the feeling many have about wanting to get back at these money-grabbers, quoting lines of the times directly, such as "Where did the money go?"  And there are more songs that aren't overtly political or societal, but simply personal, although not necessarily in Collett's voice.  Miss Canada is about a woman forced to leave the East because of the lack of jobs, ending up like so many others in Fort McMurray, hardly the Promised Land:  "And when the wind blows and the Athabasca River flows/restless is all she knows."

There are songs to break the mood too.  King James Rag takes a bunch of familiar phrases from the Old Testament (eye of the needle, the fatted calf) and spins them into a quick ditty with a jaunty beat.  And the pace is surprisingly quick for a heavier album, with a couple of numbers under two minutes, and several more under three.  It's also a lighter-listening experience, with strings carrying a lot of the weight, and no murk in the production; the acoustic guitars are pure, no instruments were hurt in the filming of this story.

Act now, 'cause there's a big bonus to owning this one as well.  CD copies come with a complete second disc, called Essential Cuts, which is a best-of from his previous four albums, and also includes two previously-unreleased cuts.  And those who buy the vinyl of Reckon will get the compilation as a bonus digital download.  Nice.
Posted by Bob Mersereau at 11:08 AM