Tribute To Cline A Perfect Night Of Music

Sometimes you see a great show where all the music is performed well.  Other times, a concert works because the songs themselves make you happy.  And sometimes it's the overall feeling of the event that makes it an exciting night.  Then there are the rare times when all of this happens together, which is what made the 7th Annual Patsy Cline Birthday Show in Toronto such a special night for me.  Or, as performer Danny Marks pointed out, simply and correctly, "What great music, and what a great cause."

The Cline tribute is held each year, for charity.  Artscan Circle is the recipient, a collective that links creative artists with Indigenous youth at risk.  Performers travel to isolated communities to encourage self-esteem there by helping explore the arts.

The annual birthday party was conceived by, and continues to be hosted by Toronto roots singer-songwriter Heather Morgan.  Obviously a big Cline fan, each year she assembles a crack band, and a host of singers, some returning friends and others newcomers.  Morgan herself is a delight onstage, a host able to bring that old-time entertainment talk to the proceedings, and a lighthearted, good-time mood that would stay throughout the night.  Plus, she's one heck of a belter, especially on the big notes.  Joining her in the house band were leader and guitarist Steve Briggs, who chimed in with vintage licks all night, along with Nichol Robertson also on guitar.  Veteran stand-up bassist Dennis Pendrith boomed in his presence, and former Blue Rodeo keys player James Gray and drummer Ted Hawkins were also superb harmony singers.

On vocals, it was highlight after highlight.  Toronto favourite Treasa Levasseur showed how big a part the blues played in Cline's ballads, and surprised more than a few with the power in her voice.  Marks, as always, was vintage cool, and one observer remarked how much true rock and roll was in that era's music, as opposed to anything today.  Hamilton's Lori Yates was definitely channeling the era of twang, clowning with Morgan before reaching deep for a forceful pair of tunes.

Russell deCarle of Prairie Oyster fame brought lots of charisma to his songs, not straying far from his Western roots, and adding some Porter Wagoner cool to the stage.  But it was his duets with the mercurial Mary Margaret O'Hara that was the wild card of the night.  She was as hilarious as ever, clearly having a ton of tun doing her vocal trills around deCarle's straight-man parts.  O'Hara just couldn't keep from signing, and could be heard adding embellishments from off-stage during other performers' songs.  Finally, she just had to get up again, and raided the stage to join Laura Hubert (ex-Leslie Spit Treeo) on her two numbers. 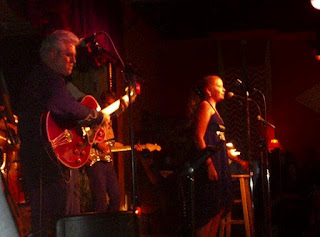 The true surprise of the night came from the youngest performer.  Word had gone around that 12-year old Samantha Windover had wowed the crowd at Mariposa this year, doing Cline numbers at an open mic session, and getting an improbable invite to do a full set at the festival.  Now 13, she appeared nervous walking to the stage, and shushing noises quiet the crowd for her.  The familiar opening notes of Crazy were played, and as soon as she opened her mouth, the audience was blown away.  Looks of joy came from every table, and no one, 13 or 33, has ever sounded that much like Cline, to my ears.  It was the record we all know, come alive.  With a follow-up of Walkin' After Midnight, the crowd of Cline fans was in heaven.

Toronto's Lula Lounge was the perfect venue, with its retro supper-club layout, table seating, and different levels, and all that was missing was the cigarette smoke and Mad Men extras.  Several performers, such as Kathryn Rose (another stand-out), took special care to do their hair and clothes in period style, as did some of the crowd.  But there were no real rules or dress codes or hang-ups.  Again, to paraphrase Marks, great music, excellent performances, a worthy cause, it was a tremendous night out, and mark next year's birthday party on your calender.
Posted by Bob Mersereau at 6:45 PM