MUSIC REVIEW OF THE DAY: GLASS TIGER - THEN NOW NEXT 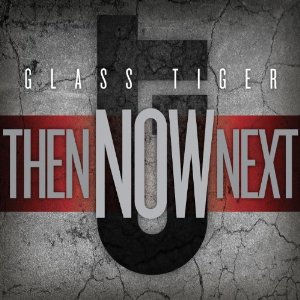 Is it time for a critical rethink of Glass Tiger?  Well, I don't wanna go too overboard, but I did appreciate these 80's hits a bit more now that I haven't heard them in awhile.  Top 40 staples for a few years, the group did come up with a healthy string of numbers, more than just the high water mark of Don't Forget Me (When I'm Gone).  My Song, with The Chieftains, is one of the better ones, Someday is a healthy ballad (also a Top 10 U.S. hit, as was Don't Forget Me).  My Town is one of the better Rod Stewart cameos around, and showed the group had some significant clout.  Don't forget the group's debut album was produced by Jim Vallance, and there was that sneaky is it or isn't it guest line from Bryan Adams.

The group is back again, touring through the land, and plugging a new single featured here, I Take It Back, a pretty good Alan Frew song, who still sounds exactly the same.  The other new cut here is a serviceable cover of The Beatles' You've Got To Hide Your Love Away.  As with almost everything recorded in the 80's, these tracks sound like it, the very glossy production of the era dating them.  If you can get your anti-80's filter working, there's more here than I remembered.
Posted by Bob Mersereau at 9:39 AM