MUSIC REVIEW OF THE DAY: PAUL RANDY MINGO - HOLDIN' ON (STILL HANGIN' ON) 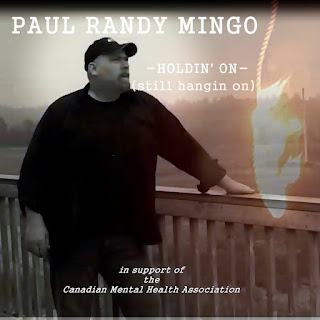 Last I heard from Salmon River, N.S., piano player Paul Randy Mingo was back in 2014, when he'd just released his second album, Crank It Up. It was a stomper, packed with lots of uptempo, pounding old-school country and rockabilly numbers, pretty much a small town, Saturday night, dance hall party from start to finish, apart from one ballad. Well, that ballad showed he had that up his sleeve as well, and now a new single and video takes the quiet route.


It's a special project for Mingo, something he's known in his life, and lots and lots of other people can relate. Holdin' On (Still Hangin' On) is about mental health and depression, with some very powerful images to match the lyrics of his piano number. Anyone who has known that helpless feeling, has had to get that note for the boss that you won't be coming to work for awhile, has listened to people criticize and offer opinions on how you just have to get over it, this song will ring true.


Mingo has released the one-off single and video as fundraiser for the Canadian Mental Health Association. Any downloads of the song or video on iTunes will see a significant portion of those proceeds go to the organization, and the video and visuals surrounding the campaign all prominently feature the CMHA name. Here's a link to the video: