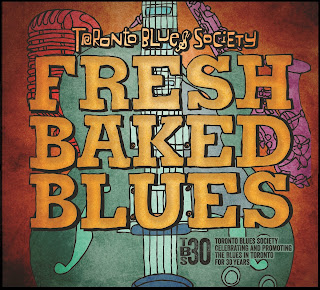 I always like to see a project coming from the Toronto Blues Society, and before you non-Toronto folks lose interest, I should point out the group has a truly national reach. Really, if it wasn't for their efforts, the national blues scene would be weaker for sure. They put on, among other things, the yearly Maple Blues Awards, which has become the celebration of blues achievement right across the country. I can tell you from first-hand experience, they go to great lengths to make sure all regions are heard from.


They make good collections as well, and this latest one features some of the best up-and-comers in the field. The idea, in celebration of the society's 30th anniversary, is to promote the organization, and get the names of these artists out there as much as possible. In doing that, it also shuts down the perception that blues is a field dominated by veteran bar bands and senior statesmen. This is a bunch of kids, relatively speaking.


Most fans with an ear to the scene will know at least some of the artists, and anybody who's been to a festival must have seen their names. The 24th Street Wailers have certainly become a favourite live band and make excellent albums, Samantha Martin and Delta Sugar immediately grabbed lots of attention with their debut as a band, Martin's big voice and the gospel-influenced sounds shaking foundations wherever they go. Irene Torres & the SugarDevils bring a modern funk edge to the party, as much New Orleans as any other form. Andria Simone comes from the soul side, another big vocal talent.


Now, you may have noticed the first four acts named, the first four on the compilation, are all fronted by women. That's another great thing the Toronto Blues Society helps with, its major concert of the year the annual Women's Blues Revue. There are lots of fine young fellows here too, including The Conor Gains Band, Chris Antonik and Michael Schatte, but starting a blues compilation with four straight women singers? That takes some ... I'm thinking balls isn't the right word.  You can find the disc at http://torontobluessociety.com/2016/02/fresh-baked-blues-cd/.
Posted by Bob Mersereau at 10:50 PM