MUSIC REVIEW OF THE DAY: THE MIGHTY ORQ - LOVE IN A HURRICANE 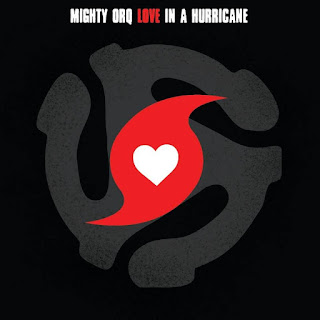 With a name like that, you better pay attention. The dude's out of Houston, an electric blues guy with a clear southern rock influence as well, and big on the guitar-organ sound. Plus, he has the big, emotive pipes to go for a large sound. Also handling all the guitar, he's a pretty formidable, and yes, mighty presence.


Except, it turns out he's no one-trick pony, as M.O. has a soulful side as well. Say It With Silence, brought in at cut four, sees him bring out his mellow side on a tune that John Hiatt would like. Next up comes the title track, this time a lover's life story, ups and down, with an acoustic guitar to the fore, organ now joined by piano, and that soulful voice still on display.


Things do return to funky fun with The Possum Song, and Orq gives himself plenty of room to stretch out on guitar. He goes old school on the Son House classic Death Letter Blues, another sound for the varied set. It's all good, with the organ-guitar combo songs the best of the bunch.
Posted by Bob Mersereau at 8:21 PM