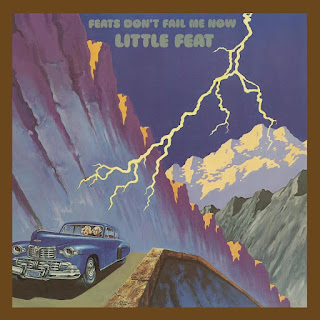 Two of the original Feat's good ones, which means they are from the Lowell George years, now back and on heavyweight vinyl. No perks here, other than fresh and fine copies. I wouldn't mind a serious reworking off Feats Don't Fail Me Now, which sounds like it got muddy somewhere along the line, but this is a lot better than the CD transfers along the way.


Feat fans like to debate which 70's album was the best, with the live Waiting For Columbus the favourite I think, and Dixie Chicken or Sailin' Shoes usually the studio choices. I waver, but I will say that 74's Feats Don't Fail Me Now has a mighty claim as well. George was still fully committed and knocking mighty compositions out of the park, including the mighty Rock And Roll Doctor and the slippery groove of Spanish Moon. The rest of the band were stepping up too, with Bill Payne's Oh Atlanta a great rave, and Paul Barrere no slouch with Skin It Back. The jam track Cold Cold Cold/Tripe Face Boogie was just that, a boogie, not a jazzy meandering that would wreck stuff in the future. 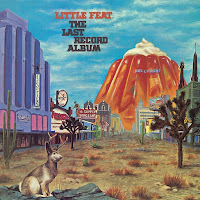 The group's next, and fifth album, The Last Record Album, was the start of the decline, although still a strong album album. As George's participation and interest was starting to waver, and Payne and Barrere starting to fill the gap, the songwriting suffered. George's quirkiness was missing, those winking, wacky lyrics, and the crazy blues numbers he'd channeled through Howlin' Wolf were replaced by more serious ballads. So it was Payne and Barrere trying to inject some fun, Romance Dance decent but no Fat Man In The Bathtub, let's say.

George's mellow numbers did connect, however. Mercenary Territory is a mighty lyric and performance, George's half-hearted apology for being such a personal mess ("Fool that I am/I'd do it all over again"). Long Distance Love sees him desperate but refusing to leave the road/lifestyle, even though he knows what would be good for him. The other guys do come through with the funky All That You Dream, but after listening to this album for 40 years, I still can't remember what Payne's Somebody's Leaving sounds like 10 minutes after hearing it. So, Feats Don't Fail Me Now, must-own, The Last Record Album, close.
Posted by Bob Mersereau at 1:01 PM