MUSIC REVIEW OF THE DAY: MARK MAY BAND - BLUES HEAVEN 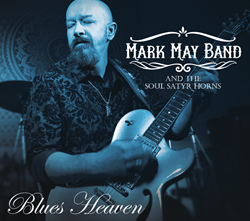 A one-time guitar player with Dickey Betts and Great Southern, May has all the tools, as a writer, singer and sharp player. Here he zips through a variety of blues styles, Southern and Northern and over to Texas. There's even a touch of funk on the number Boomerang. He's especially adept at the lively stuff, coming alive during fun numbers such as Put Down That Poison, with its rollicking Chicago-meets-jump blues sound.


It's one of several here where May is aided by the Soul Satyr Horns, who really push the good times-level up with some great solos and ensemble work. That lets May shine even more, when he unleashes some of his stinging leads. Plus, his soulful voice never fails to cut through and make each number better. A strong sixth album for this guy out of Ohio.
Posted by Bob Mersereau at 9:26 PM