MUSIC REVIEW OF THE DAY: THE KAT KINGS - SWINGIN IN THE SWAMP 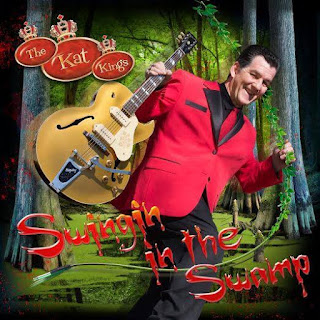 Is there a more joyous music than 50s rhythm and blues? Nothing says Saturday night party better, in my books. It swings like no other. Kevin McQuade returns with his second take on the form, a mix of all those roots sounds, a little rockabilly here, jump blues there, leaning into rock and roll at times, but all coming out infectious and highly dance-worthy.


McQuade has put together a strong team of some of the blues/roots scene's best players, a small but mighty crew featuring producer Teddy Leonard (Fathead) on guitar, John Dymond (Blackie & the Rodeo Kings, Bruce Cockburn) on bass, keyboard player Wayne Dagenais, and Big Wreck drummer Chuck Keeping. It's a cast that moves smoothly through the various styles here, all the while keeping it


The Kat Kings break with the party groove in a couple of spots, with a blues ballad I'm Just A Shadow, and the southern-greasy It Came From The Swamp, Ode To Billie Joe meets a zombie movie. But really, it's all about the party, Late Night Thing a New Orleans number letting Keeping get the rhythm going and Dagenais do some classic piano work. The night comes to an end with Baby You Can't Drink, getting pretty close to a Jerry Lee Lewis flat-out rocker, leaving 'em calling for more.
Posted by Bob Mersereau at 11:16 PM