MUSIC REVIEW OF THE DAY: NEIL YOUNG + PROMISE OF THE REAL - EARTH 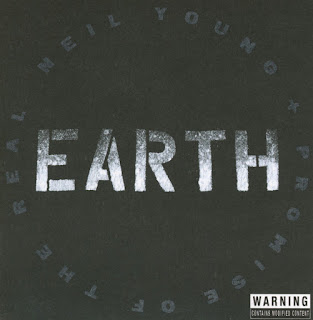 Well, here's another wacky concept from Neil, and really, he's been getting further and further out there for a while now. But this on, on paper, seemed to take the cake. It's a live album, but heavily doctored, with overdubs, huge amounts of extra vocals from a small choir of singers, some effects, and most strangely, all these added animal noises. Yes, animals. Honking geese, buzzing insects, all manner of hoots and grunts, mostly at the start and end of cuts, often alongside audience applause.


Still with me? One might assume a double-live album would be an opportunity for Young to trot out some hits and get back a little of the sales magic he's lost lately. But instead, the songs come from his recent themed tour, which saw him doing cuts from his career about food and the land. Now, we all know and admire him for Farm Aid, but his last studio album, The Monsanto Years, didn't exactly set the world ablaze in a frenzy of protest. He always seems to forget you need good lyrics to inspire, not platitudes. Anyway, he's written a ton of these Mother Earth-type songs over his career, including the annoying Mother Earth, which kicks off the set. The only one you'd call a hit or favourite would be After The Gold Rush.


Touring with a group of young acolytes, The Promise of the Real, featuring two of Willie Nelson's sons, even their energy gets buried in the tape doctoring. Mostly this is Neil's vocals, the studio-added backing singers, and those damn chirping crickets and horses and such.


Like I said, wacky. And guess what? I'm shocked at how much I enjoy it. Apart from a couple of clunkers, the aforementioned Mother Earth, and a clunky brand new number, Seed Justice, debuted at last year's Farm Aid, it works surprisingly well. There are some welcome old friends returning from past albums, such as Vampire Blues off On The Beach, Country Home from Ragged Glory, and Comes A Time's Human Highway. The new songs, particularly Big Box, come across better sandwiched with other cuts rather than the similar-sounding numbers of The Monsanto Years. And those backing vocals? Well, they do work, adding some harmony to the gruffness, and even a few new surprises to old chestnuts. Even the animal noises aren't a distraction once you are used to them, and there's some sort of odd logic to having them there. At the very least, Young proves that cows kind of sound like his guitar in self-destruct mode.


Don't even start the debate about using overdubs on live albums. Young has been mixing up the two sources since at least the early 70s, taking live performances as bed tracks for albums, sticking live moments in the middle of studio collections, and I'm still pretty convinced that wasn't Crazy Horse singing when I saw them live back in the 90s, but rather some sort of programming. Arguably his greatest moment came from his manipulation of a short series of live shows into the "studio" album, Rust Never Sleeps. And that's just fine, it's audio art, and I'm buying into this song set.


As always, Young could have played it a lot safer. The tour he's collected these songs from featured such favourites as Heart of Gold, Long May You Run, Old Man, Everybody Knows This Is Nowhere, Down By The River, and plenty more, a wide-ranging setlist with the adaptable Promise of the Real. But damned if he didn't hear a whole different album out of all these tapes and songs, a theme that didn't even come out in the concerts, only back at the ranch when he started playing with the tapes. That is one of Young's oldest strengths, which may be why this works so well.
Posted by Bob Mersereau at 11:57 PM