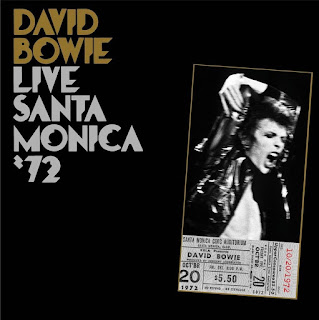 The Bowie onslaught continues with these two vinyl reissues; remember, this was all planned out way before he passed away, and is just the first phase of massive reissue campaigns. We're still back in the first "five years" of his stardom, the Ziggy years. With these two releases, that era seems to be taken care of now, so stayed tuned with the next bunch, perhaps a new box set for Christmas, something like that, covering the rest of the 70's.

These are two period live albums, from 1972 and 1973, both Ziggy Stardust shows, both first released long after those days but now put in the correct spot chronologically. Live Santa Monica '72 was originally a famous bootleg, taken from a radio broadcast, and eventually made legal in 2008. That boot was so well-known and readily available, I was able to pick it up back in the day in remote Fredericton, from the beloved Little Records at UNB. It was a mind-blower then, real Ziggy, real Spiders, the great Mick Ronson ripping out leads, Bowie covering Lou Reed and Jacques Brel, sitting for an acoustic mini-set, spitting out raw versions of Jean Genie, Suffragette City and Hang On to Yourself. This was miles better than the seemingly tame David Live set, in all its low fidelity and roughness, missed notes and forgotten lyrics. This is why so many record fans grew up loving bootlegs.

Nothing has been cleaned up for this release, simply because it's only ever been a radio broadcast tape, and the whole idea was to celebrate the original bootleg pressing. I'm sure this new heavyweight vinyl pressing will at least stay in better shape than that old bootleg of mine, now long scratched and trashed. 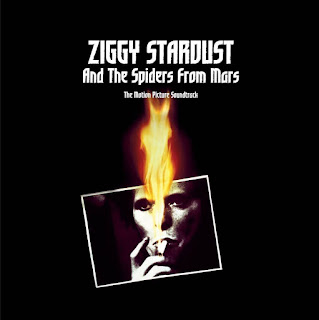 The Ziggy Stardust and the Spiders From Mars soundtrack was recorded just nine months later, in July of 1973. You could hear a few changes in the repertoire, the Aladdin Sane album now in the racks, Mike Garson's piano a more important part of the show, and Bowie looking past Ziggy, This was actually the last Ziggy show, Bowie announcing he was quitting the stage at the end of the concert. It was the first of many times he did that, but in this case it was partly true, as he did bury the Ziggy character and, sadly, disband the Spiders.

The original project, the movie and soundtrack album, were shelved when Bowie wanted to just get away from Ziggy. Eventually both did arrive, this soundtrack first showing up in 1983. It's been reissued a few times, as the first mix was bad, some cuts were edited and the order shuffled. This reissue does use the best, latest mix and running order, but frustratingly, it still doesn't include the Jeff Beck guest spot on The Jean Genie/Love Me Do/Round and Round encore. Beck's choice no doubt, but guess what? I've had it on the 70's bootleg all this time. Again, loving the bootleg.


You really don't need to make a choice between this show or Santa Monica, as you should have both. This has the better sound, and some significant set changes. There's a great extended medley of Wild Eyed Boy From Freecloud/All The Young Dudes/Oh! You Pretty Things, new Aladdin cuts Watch That Man, Time and Cracked Actor, and another of Bowie's beloved Velvet Underground covers, White Light/White Heat. And as for having them on vinyl, it beats the heck out of the '83 version, which had the bad mix. The movie is pretty cool too, if you ever get a chance to see it.
Posted by Bob Mersereau at 12:00 AM