MUSIC REVIEW OF THE DAY: U2 - iNNOCENCE + eXPERIENCE Live in Paris (blu-ray or DVD) 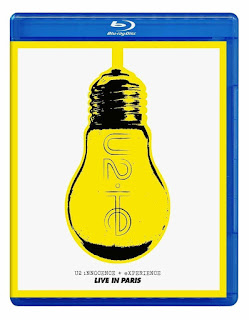 Poor Bono. It couldn't have gone worse, really. U2's last album, Songs of Innocence, was supposed to be this major personal statement for the group, with Bono getting open and emotional about their youth and upbringing in Ireland, touching on friendships, family, angst, confusion, young love, all that stuff, plus the Irish stuff too. Then it all blew up in his face with the whole Apple-automatic download fiasco, which pretty much insured nobody would be paying attention to this soul-baring concept set.


Well, maybe that was for the best, as it wasn't among the group's greatest efforts. Two years on though, we can now see the other part of the package, the live event. Here's the thing about being a hugely rich rock band that is still trying to be relevant; you got the money to push the envelope. And U2 sure does that in the concert arena. This is more than just a lavish set, it's a ground-breaking, mind-blowing, holy crap arena blockbuster. It is unlike any rock show you've ever seen, with design features and technical achievement that surely set new standards. I'm not being hyperbolic here, I know a little about the technical side from previous careers, and keep an eye on such things. Plus, I watch a lot of music DVDs in the job, you know. We're talking something on the level of the Olympic Opening Ceremonies.


Honestly, you could hate this band and still watch this show and be excited. The stage splits the Paris arena in half, there are gigantic screens that go up and down, sometimes with the band inside them. At one point Bono is seen walking down the Dublin streets of his youth, as they are projected on the screens, while he strolls down the long thin floor of the stage. The band keeps moving back and forth down the length of the arena, to different set-ups, sometimes Larry Mullen Jr. carrying a drum with him, all the while playing to the audience on all four sides, and up close to them on the floor.


Well. I'm tempted to leave it there, because I'm quite serious that you should see this concert just as an achievement in spectacle. However, there's lots more that can be said about the show. The concept is that the innocence part happens in the first set, and the experience in the second. We get Bono's tales of youth for innocence, including a set of songs from the new album, even one, Iris (Hold Me Close), about his mother, who died when he was 14. Other hits, including I Will Follow and Sunday Bloody Sunday, fit in with the early days theme. Then comes the experience side, which sees the band, especially Bono, in full flight as the veteran rock band with a killer list of greatest hits, and we get hit with them full-bore. There's Mysterious Ways, Where The Streets Have No Name, Pride, With or Without You, and a totally different front man, Bono bringing out his cocky guy routine, the confidence that comes with experience.


At times, it does feel a bit like an act, and side shots of band show them going about their business, a little distant from the lead singer. But at the same time, this is Bono having to rise to the occasion, a very daunting one. Three weeks before was the terror attack in Paris, where this show was recorded. It was supposed to be the next night, but was cancelled, for good reason. They had promised to make it up as soon as possible, and that they did, coming back to play while the city was still barely functioning. So all the talk Bono offers about love over hate, it's not posturing. All you haters, we can give him a break on this one. The show ends with two cuts featuring Eagles of Death Metal, the band playing the Bataclan club that fateful night.


The DVD version has two discs, the second holding a plethora of bonus cuts from other shows, videos from the last album, a guest appearance by Patti Smith the night before, and some back-to-Ireland film to match the concept. It all fits nicely onto one blu-ray, or you mega-fans can get one of their typically extravagant super deluxe boxes, this one in gorgeous hard-case packaging, individually numbered and packed with pins, stickers, stencils, postcards, an exclusive book, download card, and a USB stick on a light bulb, the chief graphic image of the tour.
Posted by Bob Mersereau at 9:49 PM