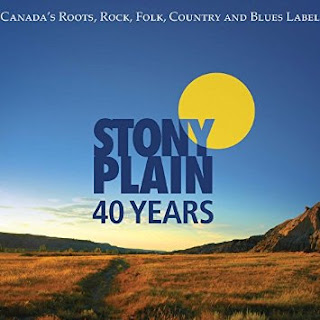 Is it that time of the decade again? It seems like just, what, five years ago I was writing a review of the Stony Plain music label's 35th anniversary package, and here they are again with another three-disc set, honouring the 40th. Actually I love this tradition, and it's been going on since the Alberta-based blues and roots label turned ten. Every five years they compile a set of hits and favourites from the wide selection of releases over the years, which continue at a furious pace.

All you need do is glance down the track listing to see how important the label has been through the years, not just for Canadian fans but on an international level. It's the home for top-quality U.S. artists such as Eric Bibb, Maria Muldaur and Duke Robillard. Music legends such as Rosco Gordon, Jay McShann and Billy Boy Arnold have enjoyed late-life success and honour thanks to the label's sense of history and stewardship. When major labels didn't step up to the plate for important work by luminaries Emmylou Harris, Steve Earle, Rodney Crowell and Jennifer Warnes, the company stepped in and scooped them up. And they curated sterling projects, such as the recent collaboration between Telecaster masters James Burton, Albert Lee, David Wilcox and Amos Garrett.

Then there's all the company does for Canada. Would Corb Lund and Tim Hus get played on regular country radio, or have anyone take a chance? The rebirth of Ian Tyson with his modern real cowboy music has been a continuing joy for over 30 years. There's the different talents of Spirit of the West, Jr. Gone Wild and Harry Manx. And the blues and jazz along the way: Jeff Healey, Kenny "Blues Boss" Wayne, Long John Baldry, King Biscuit Boy, Paul Reddick and Big Dave McLean, they're all here, some old cuts, some brand new.

The format has stayed the same, with one disc of singer-songwriter types, one of blues and such, and a third that always rareties of some sort, sometimes a DVD of videos. This time it's twelve unreleased or ridiculously hard-to-find cuts you'd have to spend a fortune for on eBay. There are two cuts from the original delta blues player Sam Chatmon, a couple from Eric Bibb that had only come out in Europe, a new cut from David Wilcox that will be on his next album for the label, and the surprising instrumental version of Amy Winehouse's Rehab from Duke Robillard, that only came out as a download back in 2009. These are great samplers of the Stony Plain 40-year legacy. If you had each one over the years, you'd have a darn good roots/blues collection. But then, you'd probably just want to buy every album they put out.
Posted by Bob Mersereau at 12:03 PM