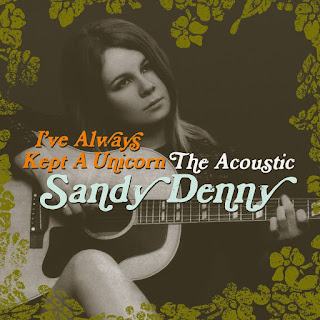 There's little arguing over Denny's status as the greatest modern English folk vocalist, even in that fractious community of fans. She remains a tragic and controversial figure though, with her checkered history of dashing between bands and projects, her moves from traditional to singer-songwriter material, and her varied attempts at solo success. Then there's her untimely death in 1978, some weeks after falling down stairs. But nobody ever, ever, denies the majesty of her singing, as well as her many songwriting contributions, starting with the classic Who Knows Where The Time Goes.


Because of her restlessness, there's a surprising amount of material recorded during her career of barely 10 years. In addition to her time with The Strawbs, Fairport Convention and Fotheringay, there was the folk-rock fun with The Bunch (featuring pals Linda and Richard Thompson), four solo albums, and several more failed attempts. All that activity meant tons of live, rare and unreleased work as well.


There have been many compilations and collections over the years, and the smart difference here is in the sub-title. This is Denny at her most stripped-down, voice and one other instrument, mostly acoustic guitar or piano. The vast majority is previously unreleased in this form, from demos, BBC and live recordings. So the whole focus is on the purity of her voice, and the incredible world she creates.


There are 40 tracks over two 70-plus minute discs, quite a windfall. We get the original, Strawbs-recorded Who Knows Where The Time Goes, which is simply her and guitar. Her famous Fairport song, Fotheringay, which gave birth to a whole band, is here featured without the guitar and vocals of R. Thompson, nothing against them of course, but fascinating to hear the simpler version.


Denny fans will revel in all the new gems to enjoy, including a trio of demos from The Bunch recordings, when she let her hair down, doing a couple of Buddy Holly tracks, and a duet with longtime friend Linda Thompson on The Everly Brothers' When Will I Be Loved. swapping the genders.

If you are unfamiliar with Denny and want to know what the big deal is, listen to her versions of the well-known folk songs She Moves Through The Fair and Wild Mountain Thyme. You'll hear the difference, how she completely inhabits the song, and makes hers the definitive reading. But that goes for anything she sang.
Posted by Bob Mersereau at 11:56 PM