MUSIC REVIEW OF THE DAY: THE ZOMBIES - THE BBC RADIO SESSIONS 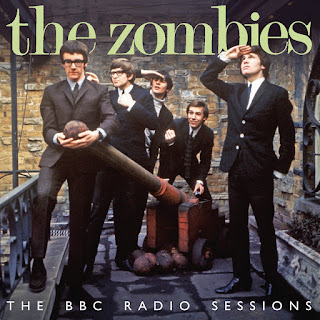 Interesting fact: We all know about the BBC recordings by now, thanks to The Beatles and many other '60's groups having collections of their live (and not-so live) recordings for the airways made available over the years.. But it was The Zombies who first had their BBC songs released, back in 1985. Since then, the floodgates opened for all the British acts of that decade, and along the way more Zombies material was discovered as well. So now we have this two-disc set of performances and interviews that brings together all known material that's been saved.


In an effort to get everything, the compilers have gone to the hard-core fans, who often have the only remaining copies. The BBC famously recycled their tapes after broadcasts, so many programs have been lost, including the Fabs, Stones, Who, etc. But in some cases, fans taped them off the radio at the time. Some of these aren't the best quality, but I say who cars, bring 'em on. If not, we wouldn't get the group doing a grand version of the Four Tops recent hit Loving You Is Sweeter Than Ever. And I'm sure everybody can deal with the occasional muddiness, when most of the songs remain in fine fidelity.


This material comes from the group's time chasing the Top 40, and includes the big hits Tell Her No and She's Not There, of course, three of the first track in fact, in surprisingly different versions, thanks to instrument changes. For the bulk of us, the group's other songs aren't that well-known, so there should probably be quite a few surprises along the way, including the Whenever You're Ready, which should have been much bigger, and Friends of Mine, the only performance of a song from the legendary Odessey & Oracle album that's been found. So, no Time Of The Season, sadly. The only other downside? Those BBC announcers can get pretty annoying after awhile.
Posted by Bob Mersereau at 11:12 PM