MUSIC REVIEW OF THE DAY: THE BEACH BOYS - SUNSHINE TOMORROW 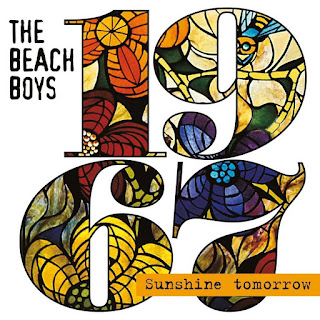 Instead of the usual deluxe set reissue of a single album, this instead focuses on a year in the career of The Beach Boys, specifically 1967. The title comes from a line in the song Let The Wind Blow, off the group's highly underrated album Wild Honey, a huge underachiever for a band that had hit the top of charts just months before with Good Vibrations, and had until that point been considered America's number one group. But the scrapping of the much-hyped album Smile, and the group's pulling out of the Monterey Pop Festival in June dropped them out of the rapidly changing rock 'n' roll scene, and saw their cool factor fall to near zero. Janis and Jimi, The Doors and The Buffalo Springfield got all the attention, and the new Rolling Stone magazine snubbed them.

The group had indeed pulled back from the ambitious project that was Smile (think Good Vibrations as a full album), and instead decide to make simpler records again, dumping all the different studios and A-level session players, and instead working out of Brian Wilson's home. It was in fact a bold move, and did result in some spectacular music, which has slowly been recognized in the 50 years since.

Wild Honey move into r'n'b sounds, on the surface odd for the California spokesband, but actually long a favourite of the group, who were raised on '50's hits of that genre. Of course The Beach Boys didn't quite do it the same, with their layered harmonies, but there's no denying the drive of the near-hit Darlin', and the raw sweetness of the Wild Honey track itself. Also featured was a strong cover of the new Stevie Wonder single I Was Made To Love Her that perhaps bested the original.

The entirety of this two-CD set, jammed at almost 80 minutes each, could be called brand-new. The Wild Honey album is presented for the first time in true stereo, a delight for the long-time fans. But that's just the beginning. Session out-takes and alternates from the whole album are featured, including songs tried out and scrapped (Hide Go Seek, Honey Get Home), ones that were held for later albums (Time To Get Alone, Cool Cool Water), and others that would appear in the '90's when the vaults started to give up their treasures (Can't Wait Too Long). But again, all these versions have never been released.

Then the live material begins, with some of the Wild Honey tracks that appeared in the setlists of the day briefly, but were dropped when the album flopped. Cuts such as Country Air and How She Boogalooed It were never heard on the stage after '67, while Barbara Ann lived on.

Disc two offers looks at the other two album projects of the year. Earlier in '67 the group had answered the demand for Smile with the very-thinned out Smiley Smile, which was pretty much some of the tracks re-recorded quickly in the home studio. Oddly, it worked wonderfully, a testament to the quality of the material. Here we get some alternate versions with interesting differences, and backing tracks, maybe the least interesting part of this set, but still worthwhile as it shows the fabulous arrangements of Brian Wilson.

The other album was scrapped, and wisely. Having missed Monterey and word going around the band wasn't functioning well, it was determined they should do their own splashy concert, and they picked Hawaii as the site. With the provisional and risque title of Lei'd In Hawaii, the group lined up a show to record, which would also feature leader Brian Wilson's rare return to the live group, itself a newsworthy event. The trouble was, Brian decided he wanted to play his Baldwin organ, not his usual bass guitar. For some reason, they decided since Brian was coming, they wouldn't bring Bruce Johnston, his bass stand-in, so it was left to Al Jardine and Carl Wilson to cover the bass role, taking the band down to one guitar. Under-prepared on the new cuts, and with a thin sound on the old ones, the shows were not up to scratch. A few songs are salvaged here, including the one-time only performance of an opening instrumental called Hawthorne Boulevard, and a song that was almost impossible to enjoy, the recent single Gettin' Hungry, you can hear why the set wasn't issued.

However, the group didn't give up that easily. Instead, they decided to go into the studio back in L.A. and fake the whole concert again, pumping up the tracks with better recordings, and then they would add fake crowd noise. It was a dubious but common practice in the '60's. That whole album is here, without the phony applause, which never got done. It's better, kind of like hearing The Beach Boys unplugged or something, but again, the right decision was made to leave that album alone.

It's quite a batch of work for one year, and shows the highs and the lows that can happen, especially when a lot is at stake and everybody is trying very hard. Certainly Wild Honey deserves a better legacy, as does all the late 60's material from the band. As a reissue format, I love the way this has been collected, offering real value-for-money and giving us context on a tumultuous year, listening historically as well as for enjoyment.
Posted by Bob Mersereau at 9:49 PM