MUSIC REVIEW OF THE DAY: THE STRYPES - SPITTING IMAGE 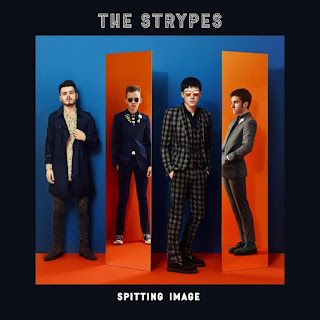 This Irish band came on the scene back in 2013, when they were still in their mid-teens, and are still in the 19-21 bracket. At first it looked like they were going to revive blues and r'n'b, with Bo Diddley and Yardbirds high on the influence list, as well as the British pub rock toughness of the mid-70's. But here on their third album, there's been a shift in their sound, and much like those pub rockers of the past, they've morphed into more of a new wave group. I mean the real, first new wave sound out of England, that of Rockpile, Nick Lowe, Squeeze and such.

That means more pop in the proceedings, plus some pretty supple work on the lyrics. Opener Behind Closed Doors hits us with the inspired couplets right away: "The clothes you wore to work today/are speckled with sick and Beaujolais." Meanwhile, (I Need A Break From) Holidays is one of those nightmare family vacations with the annoying uncle. It's filled with that Farfisa organ sound that Jools Holland used in Squeeze, as well as the same kind of jagged guitar solo Glenn Tilbrook would rip out. It's all very much that Top of the Pops sound of immediate post-punk pop, lots of energy but just as much melody, infectious as all get out. Since this is my favourite era of music of all time, big A-pluses from me.
Posted by Bob Mersereau at 1:41 AM