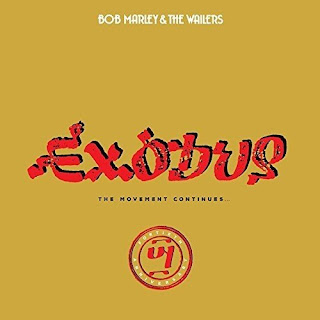 Marley's most loved album (after the Legend hits set) has been given the deluxe treatment before, so they had to come up with something new for this 40th edition. They did well; it's 3 CD's this time, disc two featuring a brand-new reworking of the album (more on that in a sec) and disc three a set of live cuts from his famous appearance at London's Rainbow Theatre over several days, when the album first came out. There have been Rainbow live releases before, but this includes previously unreleased versions, except for one song.

Back to that disc two: Son Ziggy has taken the original album tapes and done a full remix on the tracks, finding some unused elements such as backing vocals and guitar parts, and played around a little bit with the original concept. It's not a radical overhaul by any means, and he was respectful of his father's ideas. Mostly the cuts are punched up a bit in the drum and bass department, more in line with today's ears. Most interesting is the version of Turn Your Lights Down Low, where he and a band have re-recorded the entire track, save the vocals, again with respect to the original but giving it a fresher sound. Waiting In Vain features an alternate version of the song from the session tapes rather than the original, again helping make this version sound fresh. Honestly, I would have been happy for him to go crazy at times, do some radical remixing, since we have the original on disc one.

The best thing about the remixing is that Ziggy played with the running order, and there he's done a much better job than Bob. The album includes some of his most-loved tracks: Jamming, Three Little Birds, One Love/People Get Ready and the title cut, but none of those appear until cut 5 of 10, which made the first side drag I always felt. On Ziggy's version, Exodus kicks things off, and we get the militant message right away, that people were on the move and weren't going to take being downtrodden anymore.

The live concert tracks show that this album was made to be played for crowds, the solid, hypnotic rhythms taking over, and you can feel the entire crowd pulsing. This album was his great act of defiance, after the failed attempt on his life back in Jamaica. The message wasn't to those who fired the shots, but rather the politicians who allowed the atmosphere to exist, and it pushed Marley to create some of his most politically charged songs, but also some of his best love songs and party anthems as well, in the burst of creativity around this album.
Posted by Bob Mersereau at 10:54 PM