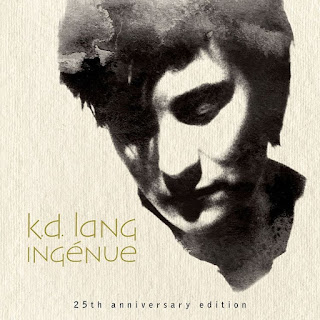 It was certainly a good move at the start of her career for lang to model herself as the reincarnation of Patsy Cline, and embrace classic country and rockabilly with a wild and wacky persona. It got her noticed big-time in Canada and helped knock down doors into the U.S., but she was also pigeonholed as country when her career advanced. Her albums were starting to show that she was an exceptional vocalist, and different roads to explore.

Still, the transformation that occurred with Ingénue was a shock for all, as it was so complete. This was not just a genre switch, lang and co-writer/co-producer Ben Mink had come up with an entire new sound for her, with no easy comparisons or slots to place her. There were lush, soaring moments, intimate, calm periods, and she finally had a full album to stretch her vocal talents, with all the shades and nuances of which she was capable.

Perhaps the use of steel guitar, accordion and strings sounds a little more common 25 years later, but that's only because she helped knock down a bunch of doors for that esoteric mix with Ingénue. The sound was only part of the transition though, as lang also opened her heart in her lyrics, and penned a song cycle about an unrequited love. The confessions were not a secret, as she even addressed herself in the song The Mind Of Love: "I'm talking to myself again/It's causing great concern for my health/Where is your head Kathryn/Where is your head."

This anniversary set comes in a deluxe box similar to her Recollection best-of set, and includes a second, live disc. It features eight of the album tracks as performed on MTV Unplugged, which haven't been released before. Sadly, there are no bonus tracks or out-takes from the album sessions, but it would surprise if there were any, as it seems such a complete statement as is.
Posted by Bob Mersereau at 10:26 PM