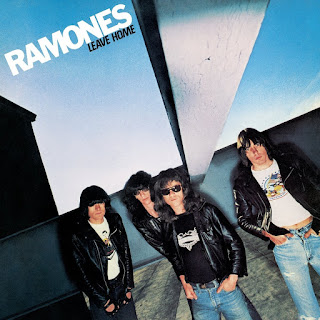 I seriously wonder if any fans of The Ramones ever worried about the mix on their albums, but for the 40th anniversary edition of their second disc, we get four different ways to hear it. There's the released version, then a brand-new mix done by original engineer Ed Stasium, rough mixes done back in the day without some of the overdubs, and finally some extra parts and instrumentals Stasium dug up from the master tapes just for fun, to make new takes. It all sounds pretty much the same, unless you're crouching close to the speakers with a stopwatch and notebook to remember the variations. Of all of them, I prefer the rough mixes, because you can make out the vocals the best, the laughs being a pretty major part of the effort.

This deluxe set features three CDs and the new mix on vinyl, plus a booklet with memories from Stasium and manager Danny Fields. Disc three features a full Ramones show from CBGB during the tour for the Leave Home album in '77, 19 songs in just over an hour, the band spitting them with unflagging energy. On first listen, I didn't even notice the note that explained the show was actually taken from a bootleg, one microphone in the small club, but there ya go, sound quality is in the ears of the beholder. I was listening to Joey's sneering vocals and Johnny's buzzsaw guitar.

Leave Home doesn't get the most attention of the crucial first four Ramones albums, but it's more a question of being overlooked. There are some very important tracks in Ramones lore here, including the brilliant cover of California Sun, showing how connected the group was to '60's Top 40 radio. The final two cuts, You're Gonna Kill That Girl and You Should Never Have Opened That Door, showcased the group's interest in horror films and grotesque oddballs. Pinhead was the ultimate celebration of that, and introduced the Gabba Gabba Hey chant, borrowed from the 1932 film Freaks. Then there's Gimme Gimme Shock Treatment, Carbona Not Glue and Suzy Is A Headbanger. When the Carbona company threatened suit, that track was pulled, replaced by the beloved Sheena Is A Punk Rocker, making the album even better. What's not to love? It's actually one of their best. Fields has the final word on why it didn't break through, saying the cover sucked. On a $10,000 budget, it wasn't like they were going to get a chance to scrap it for another.
Posted by Bob Mersereau at 8:32 PM