MUSIC REVIEW OF THE DAY: DELANEY & BONNIE & FRIENDS ON TOUR WITH ERIC CLAPTON 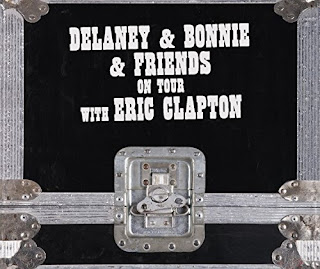 Here's a slimmed-down version of the 2010 boxed set release, still with four CD's and a great book, just packaged in a small case, available at a cheaper price, thanks. This band has always been more famous for its story than its music, but they did cook, especially on these live shows caught over a week in England. As the extensive notes explain, the influence they had on rock and roll's future can't be overstated, serving as an incubator for the sound and stars that would go on to dominate much of '70's rock.

Here's the backstory quickly: Delaney and Bonnie were a rising L.A. act, and Delaney had gathered a lot of the area's hotshot players into his ad hoc backing band. They were the first white act signed to Stax Records, thanks to this incredible southern r'n'b sound they had developed, but that album failed to sell. Next they made a record that quickly got passed around to the right people, called The Original Delaney and Bonnie and Friends. George Harrison tried (unsuccessfully) to grab them for Apple Records, and played the disc for pal Eric Clapton, who loved them so much he had them open a U.S. tour for his current band, Blind Faith. Tired of being the star, and just wanting to play in a band, Clapton decided to join forces with the Friends as they were known, one of the large collective overseen by the Bramletts.

With Delaney producing, Clapton shipped the whole collective to England to live at his house and start work on his first solo album, and then go on tour. Billed as the stars, but "with" Clapton as part of the band, the act was on the cusp of breaking through. It's easy to hear why everyone was excited. Delaney and Bonnie were thrilling singers, plus they had Rita Coolidge keeping the Southern gospel vibe going. The rhythm section was tight and perfect, with bass player Carl Radle, drummer Jim Gordon, and organ player Bobby Whitlock. In addition to Clapton on lead and Delaney on rhythm, Traffic's Dave Mason had decided to join in, doing some singing as well. It was also the first big exposure of the legendary horn duo of Bobby Keys and Jim Price. After seeing them play at the Royal Albert Hall, George Harrison couldn't stand not being more involved, so he joined them on the bus, and hid in the back on stage, playing slide guitar out of the spotlight.

The original album had eight cuts, recorded by the cream of the crop, the brothers Andy and Glyn Johns. This wide-ranging, hugely talented group had captured lightning in a bottle for sure, and was pumping out huge grooves with unbelievably tight arrangements. The intricate Coming Home, a song written by the Bramletts and Clapton, features intricate, fiery guitar led by Clapton with Harrison's slide licks, and dynamite horns, plus Delaney's impassioned vocals. Only two things could happen with this mix; it could skyrocket and become the biggest band of the day, or it could implode. It was the latter of course, too many personalities and too much booze and drugs.

The album was easily the biggest of Delaney and Bonnie's career, but when they finished the tour and got back to the States, the emphasis was placed on finishing Clapton's album. They did perhaps too good a job there; Delaney cajoled and convinced the unambitious star to finally sing for a full record, and it was an instant success, mostly with songs co-written by the team, as well as After Midnight, which Bonnie brought to Clapton. Meanwhile, offers too good to pass up came for the other musicians. The rhythm section and Coolidge were scooped up for Joe Cocker's Mad Dogs and Englishmen outfit, while the horn players were whisked off to The Rolling Stones. Clapton then took Radle, Whitlock and Gordon for his next group, Derek & the Dominoes. The Bramletts were Friend-less, and subsequent studio albums failed to catch on.

Each CD here features basically a full concert from four different shows, so there is some repetition of cuts, but which everything so dynamic and fluid, you won't mind. It's interesting to hear the band develop over the week, confidence growing, and energy as well, with the realization that they could excite the British crowds. By the time they closed out the final night in Croydon with a medley of Little Richard hits, they had all the power of James Brown or Ike and Tina, but with a rock element as well. The only similar sound I can think of is Bruce Springsteen's E Street Band live encores, and I'm left wondering if he modeled his famous Detroit Medley after the one here (they share Jenny Jenny), as well as Mitch Ryder's version.

Both Bramletts were famously a handful, and probably did themselves no favours with the suits and lawyers controlling things, so we're left wondering what might have been. This expanded set only helps that mystery along, with more recorded proof of what a great live act this band was for that brief, shining time.
Posted by Bob Mersereau at 11:24 PM