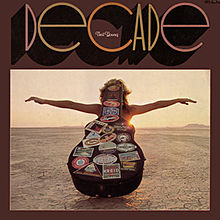 Without a doubt this is one of the best compilation albums ever, and helped set the standard for the box set craze that would come in the CD era.  What Young did was unprecedented at the time (1977), putting out a career retrospective that included 3 LP's, with several unreleased songs and different versions.  Plus, it was his material from all his different periods and bands; Buffalo Springfield, CSNY, Crazy Horse and solo.  Thanks to the inclusion and only appearance of songs such as the Springfield's Down To The Wire, Love Is A Rose, Campaigner, and the different mix of Long May You Run with Crosby and Nash added, this is a must-own for any Neil fan.

Of course, it's just plain awesome from start to end as well.  Young turned out to be a grand editor, including almost every song that has lasted the test of time from his first decade.  This is where the concert staples of his next 40 years were first gathered; Cinnamon Girl, Cowgirl In The Sand, Down By The River, Southern Man, Tonight's The Night, Like A Hurricane, Cortez the Killer, all the electric tracks.  Acoustic tours would feature Heart of Gold, The Needle and the Damage Done, Old Man, Helpless, and After The Gold Rush.
This set was first reissued for Record Store Day as vinyl, and now appears in CD form.  There were lots of raves for the audio quality of the LP's, and to my ears this pressing easily beats the old, out-of-print CD version as well.  Plus, a nice bonus:  Originally the CD version had some tracks edited down for space reasons, but thanks to better technology, the original lengths have been restored, as much as 21 seconds on The Old Laughing Lady.  There wasn't much wrong with this before, and now it's even better.
Posted by Bob Mersereau at 11:38 PM